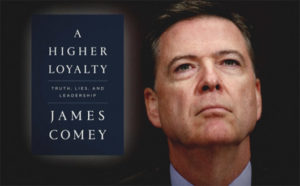 Comey reportedly received an advance in excess of $2 million for the book.

“James Comey illegally took and then leaked material from his FBI memos in order to get a special counsel appointed to target President Trump,” said Judicial Watch President Tom Fitton.

“And so now Judicial Watch is asking questions about whether Comey is getting special treatment from the FBI to use these ill-gotten FBI documents in his book.”

The government watchdog group filed the suit after the DOJ failed to produce any records in response to a March 16 FOIA request for all records of communication between the FBI and Comey relating to the book and records relating to the requirement for pre-publication review by the FBI.

During an April 15 interview with ABC’s George Stephanopoulos, Comey admitted to leaking conversations with President Donald Trump in order to get a special prosecutor appointed, saying, “Look, it’s true … I gave that unclassified memo to my (friend), who was also acting as my lawyer, but this wasn’t a lawyer task, and asked him to give it to a reporter.”