In a tradition started by Ronald Reagan, outgoing presidents have left a letter to their successors, usually on the Resolute Desk which was given to the United States by Queen Victoria in the 19th century. 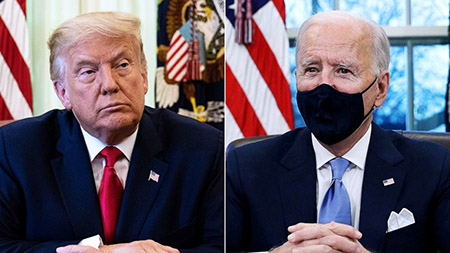 Former President Donald Trump revealed what he wrote to President Joe Biden when he left office in January.

“Basically I wished him luck and, you know, it was a couple of pages long and it was from the heart because I want to see him do well,” Trump said during a podcast interview on Monday with Lisa Boothe.

Biden has never mentioned the contents of the letter but said it was “very generous.”

Former President Barack Obama left a note to Trump, reading in part: “This is a unique office, without a clear blueprint for success, so I don’t know that any advice from me will be particularly helpful … American leadership in this world really is indispensable. It’s up to us, through action and example, to sustain the international order that’s expanded steadily since the end of the Cold War, and upon which our own wealth and safety depend.”

Former President George W. Bush left a letter to Obama, reading: “Very few have had the honor of knowing the responsibility you now feel. Very few know the excitement of the moment and the challenges you will face … There will be trying moments. The critics will rage. Your ‘friends’ will disappoint you. But, you will have an Almighty God to comfort you, a family who loves you, and a country that is pulling for you, including me. No matter what comes, you will be inspired by the character and compassion of the people you now lead.”

Trump told Boothe that he wants Biden to “do well, but that doesn’t include closing up the Keystone Pipeline, which by the way environmentally is much better than having [crude oil] on trains. But [Biden’s] friend and supporter Warren Buffett has trains. Nobody ever talks about that.”