Solomon: ‘Activist’ U.S. ambassador in Ukraine had a ‘do not prosecute list’

The Democrats’ star witness at their public impeachment spectacle on Nov. 15 was former U.S. Ambassador to Ukraine Marie Yovanovitch whose testimony was accompanied by live tweets from the President of the United States who had replaced her as commonly happens when administrations change. 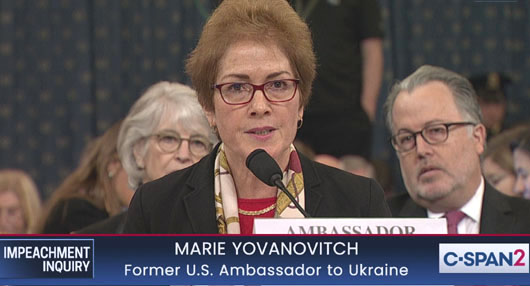 According to a Nov. 13 report by investigative journalist John Solomon, Ukrainian officials, particularly the country’s prosecutors, “viewed Yovanovitch as the embodiment of an activist U.S. embassy in Kiev that ruffled feathers by meddling in internal law enforcement cases inside the country.”

Democrats and their major media allies have dismissed anything not related to President Donald Trump’s alleged “quid pro quo” with, or “bribery” of, Ukraine as conspiracy theories, including Solomon’s reporting.

As the story of the U.S. embassy’s “do not prosecute list” spread, a Ukrainian news outlet claimed the individual who told Solomon the list existed had recanted. Solomon said he called the individual, Yuriy Lutsenko, who denied recanting or even changing his story.

“But American officials and news media eager to discredit my reporting piled on, many quoting the Ukrainian outlet without ever contacting Lutsenko to see if it was true,” Solomon wrote.

“One of the American outlets that did contact Lutsenko, The New York Times, belatedly disclosed today that Lutsenko told it, like he told me, that he stood by his allegation that the ambassador had provided him names of people and groups she did not want to be targeted by prosecutors.”

Solomon wrote: “It is neither a conspiracy theory nor a debunked or retracted story. U.S. embassy officials DID apply pressure to try to stop Ukrainian prosecutors from pursuing certain cases.”

U.S. diplomats, Solomon wrote, “saw no problem in their actions, believing that it served the American interest in combating Ukrainian corruption. The Ukrainians viewed it far differently as an improper intervention in the internal affairs of their country that was forbidden by the Geneva Convention.”

Solomon continued: “That controversy is neither contrived, nor trivial, and it predated any reporting that I conducted. And it remains an issue that will need to be resolved if the Ukraine and U.S. are to have a more fruitful alliance moving forward.”

A diplomatic source told Solomon that Yovanovitch had “caused a commotion in Ukraine a few weeks before that country’s March 31, 2019 presidential election by calling for the firing of one of the prosecutors aligned with the incumbent president.”

The diplomat said that U.S. State Department official David Hale was about to travel to Ukraine and was prepping to be confronted about Yovanovitch’s comments.

Yovanovitch gave a speech on March 5 of this year calling for Ukraine’s special anti-corruption prosecutor to be removed.

“And the Ukraine media was abuzz that she had done so,” Solomon wrote. “And yes, Under Secretary of State Hale got peppered with questions upon arriving in Kiev, specifically about whether Yovanovitch’s comments violated the international rule that foreign diplomats avoid becoming involved in the internal affairs and elections of their host country.”

Hale “dutifully defended” Yovanovitch, Solomon noted. Hale said: “Well, Ambassador Yovanovitch represents the President of the United States here in Ukraine, and America stands behind her statements. And I don’t see any value in my own elaboration on what they may or may not have meant. They meant what she said.”

Up to that point, I had focused months of reporting on Ukraine on the U.S. government’s relationship with a Ukraine nonprofit called the AntiCorruption Action Centre, which was jointly funded by liberal megadonor George Soros’ charity and the State Department. I even sent a list of questions to that nonprofit all the way back in October 2018. It never answered.

Given that Soros spent millions trying to elect Hillary Clinton and defeat Donald Trump in 2016, I thought it was a legitimate public policy question to ask whether a State Department that is supposed to be politically neutral should be in joint business with a partisan figure’s nonprofit entity.

State officials confirmed that Soros’ foundation and the U.S. embassy jointly funded the AntiCorruption Action Centre, and that Soros’ vocal role in Ukraine as an anticorruption voice afforded him unique access to the State Department, including in 2016 to the top official on Ukraine policy, Assistant Secretary of State Victoria Nuland. (That access was confirmed in documents later released under FOIA to Citizens United.)

Soros’ representatives separately confirmed to me that the Anti-Corruption Action Centre was the leading tip of the spear for a strategy Team Soros devised in 2014 to fight corruption in Ukraine and that might open the door for his possible business investment of $1 billion.

After being tipped to the current Yovanovitch furor in Ukraine, I was alerted to an earlier controversy involving the same U.S. ambassador. It turns out a senior member of Congress had in spring 2018 wrote a letter to Secretary of State Mike Pompeo alleging the ambassador had made anti-Trump comments and suggesting she be recalled. I confirmed the incident with House Rules Committee Chairman Pete Sessions and got a copy of his letter. Yovanovitch denies any such disloyalty to Trump.

Nonetheless, I had a career diplomat and a Republican lawmaker raising similar concerns. So I turned back to the sources I had developed starting in 2018 on Ukraine and began to dig further.

I learned that Ukrainian officials, particularly the country’s prosecutors, viewed Yovanovitch as the embodiment of an activist U.S. embassy in Kiev that ruffled feathers by meddling in internal law enforcement cases inside the country.

To back up their story, my sources provided me a letter then-embassy official George Kent wrote proving it happened. State officials authenticated the letter. And Kent recently acknowledged in this testimony he signed that letter.

With the help of a Ukrainian American intermediary and the Ukraine general prosecutor’s press office, I then secured an interview in mid-March 2016 with Ukraine’s then top prosecutor, Yuriy Lutsenko. In the interview that was videotaped and released for the whole world to see, Lutsenko alleged that in his first meeting in 2016 with Yovanovitch, the U.S. ambassador conveyed the names of several Ukrainians she did not want to see investigated and prosecuted. He called it, colloquially, a “do not prosecute list.”

The State Department denied such as list, calling it a fantasy, and I quoted that fair comment in my original stories. But before I published, I held the Lutsenko interview for a few days to do more reporting. State arranged for me to talk to a senior official about the Lutsenko-embassy relationship.

I provided the names that Lutsenko claimed had been cited by the embassy. That senior official said he couldn’t speak to what transpired in the specific meeting between Yovanovitch and Lutsenko. But that official then provided me this surprising confirmation: “I can confirm to you that at least some of those names are names that U.S. embassy Kiev raised with the General Prosecutor because we were concerned about retribution and unfair treatment of Ukrainians viewed as favorable to the United States.”

In other words, State was confirming its own embassy had engaged in pressure on Ukrainian prosecutors to drop certain law enforcement cases, just as Lutsenko and other Ukrainian officials had alleged.

When I asked that State official whether this was kosher with the Geneva Convention’s prohibition on internal interference, he answered: “Kiev in recent years has been a bit more activist and autonomous than other embassies.”

More recently, George Kent, the embassy’s charge d’affaires in 2016 and now a deputy assistant secretary of state, confirmed in impeachment testimony that he personally signed the April 2016 letter demanding Ukraine drop the case against the Anti-Corruption Action Centre.

He also testified he was aware of pressure the U.S. embassy also applied on Ukraine prosecutors to drop investigations against a journalist named Vitali Shabunin, a parliamentary member named Sergey Leschenko and a senior law enforcement official named Artem Sytnyk.

Shabunin helped for the AntiCorruption Action Centre that Soros funded, and Leschenko and Sytnyk were criticized by a Ukrainian court for interfering in the 2016 US election by improperly releasing or publicizing secret evidence in an ongoing case against Trump campaign chairman Paul Manafort.

It’s worth letting Kent’s testimony speak for itself. “As a matter of conversation that U.S officials had with Ukrainian officials in sharing our concern about the direction of governance and the approach, harassment of civil society activists, including Mr. Shabunin, was one of the issues we raised,” Kent testified.

As for Sytnyk, the head of the NABU anticorruption police, Kent addded: “We warned both Lutsenko and others that efforts to destroy NABU as an organization, including opening up investigations of Sytnyk, threatened to unravel a key component of our anti-corruption cooperation.”