SCOTUS blinked, Texas did not 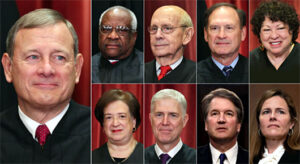 Following are responses to the December 11, 2020 U.S. Supreme Court decision.

The Supreme Court, in tossing the Texas lawsuit that was joined by seventeen states and 106 US congressman, have decreed that a state can take unconstitutional actions and violate its own election law. … This decision establishes a precedent that says states can violate the US constitution and not be held accountable. This decision will have far reaching ramifications for the future of our constitutional republic. Perhaps law-abiding states should bond together and form a Union of states that will abide by the constitution.”

The irony of the Supreme Court’s latest duck is that, in the end, it may have ruined itself — that is, if the Democrats take both Senate seats in Georgia, and Biden is sworn in as presidents, Schumer has made clear his intent to destroy the Court as an independent institution. Consequently, the Court’s unwillingness to even hear significant challenges will boomerang.

Keep in mind, the Leftist didn’t come to power in academia and elsewhere through the power of their thoughts. They LITERALLY set off bombs, kidnapped, raped and killed people, put guns to the heads of university presidents and burned down cities. To take back America, it’s not going to be enough to write clever articles or excel in thoughtful debate. We’re going to have to do things that good people don’t normally do. We don’t have to BE them but to defeat them we can no longer pretend we’re dealing with our well-intentioned colleagues, neighbors and friends.

[Journalism students are invited to assess the objectivity of news “ledes” from media reports below]:

The Supreme Court on Friday rejected a lawsuit backed by President Donald Trump to overturn Joe Biden’s election victory, ending a desperate attempt to get legal issues rejected by state and federal judges before the nation’s highest court and subvert the will of voters.

CNN, Regarded as generic news by airports, many businesses

During the past four years, President Donald Trump has challenged the integrity of the Supreme Court and tried to drag the justices into the legal muck with him.His arguments have pushed the boundaries of the law and his assertions have tested the impartiality of individual justices. But Trump’s meritless attack on the November election and his loss to Joe Biden in a brazen lawsuit initiated by the Texas attorney general brought the court into a wholly new realm.The high court slapped down the case promoted by Trump on Friday, three days before the Electoral College will meet to cast votes for Biden as the winner of the November election, with no noted dissents.

NY Times, Once regarded as the international newspaper of record

The Supreme Court on Friday rejected a lawsuit by Texas that had asked the court to throw out the election results in four battleground states that President Trump lost in November, ending any prospect that a brazen attempt to use the courts to reverse his defeat at the polls would succeed. The court, in a brief unsigned order, said Texas lacked standing to pursue the case, saying it “has not demonstrated a judicially cognizable interest in the manner in which another state conducts its elections.”

SCOTUS blinked, Texas did not