Taxpaying parents, who outsource the life education of their children to public schools, are learning new things. Here’s one:

The “genderbread person” has been benched in U.S. schools in favor of the sexually ambiguous mythical “gender unicorn” which its creators say is “dedicated to transforming the educational environment for trans and gender nonconforming students through advocacy and empowerment.” 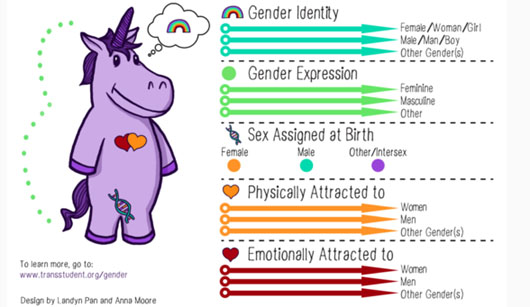 How large is the “trans and gender nonconforming students” community? Few would hazard a guess, but if schools start with this curriculum in kindergarten, this community is likely to grow.

The unicorn, created by Trans Student Educational Resources, is being used to teach children as young as 5 about sex and gender identity.

The “gender unicorn” is not required curriculum, but teachers are “given some leeway regarding the use of supplemental materials,” columnist Elizabeth Hovde wrote for the Oregonian on July 22.

“While that might not be problematic in math, it can be trouble for ideological subject matter, thus spawning this call to parents to be more involved in their child’s schooling. And school boards should know that if it is a true goal to have parents participate in their child’s learning in health education, as is often said, they should be making sure teachers run supplemental materials for health instruction by them.”

Parents protested when Charlotte-Mecklenburg Schools in Charlotte, North Carolina adopted the “gender unicorn” late last year. The school district said at the time that it planned to allow transgender students to use the pronouns, name and bathroom according to their gender identity.

“It was really slick. It is friendly looking and deceitful because that unicorn, to me, represents the religion of sex. It is silencing and penalizing those of us who believe we were created male and female and should be able to use those terms,” Donica Hudson, a mother of two students, told WCNC.

Hovde said she found out about the “gender unicorn” when a middle school student she knows came home with a handout featuring the purple creature.

“The unicorn invites students to consider their gender identity, gender expression, declare their sex ‘assigned at birth,’ and choose who they’re physically and emotionally attracted to,” Hovde wrote. “For the kids who haven’t yet had their first kiss, or even the desire for one, this must be confusing subject matter. After all, many adults aren’t even clear on the differences between gender identity, gender expression and sexual identity, and we’re misguidedly fighting about bathrooms, instead of employing common-sense solutions for the loo.”

Hovde said that the sexual health and school health specialist for the Oregon Department of Education told her: “We have more and more kindergartners coming out and identifying.”

“The best solution I see is for those teaching health education to run supplemental materials by their students’ parents, remembering that parents are supposed to be childrens’ primary educators,” Hovde wrote. “Some parents have given up that role; but some of us haven’t. I want to be at least as involved in the gender-and-sexual-identity discussion with my kid as a purple unicorn.”