The Oct. 26 congressionally-mandated release of 2,800 pages of files on the Kennedy assassination again shone a spotlight on President Donald Trump’s rocky relationship with his intelligence agencies. 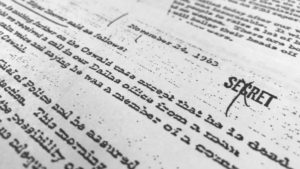 Just hours before the release of the files, White House lawyers reportedly were still fielding requests for additional redactions from the spy agencies.

Under a 1992 law, all records related to the JFK assassination were to be made public unless explicitly withheld by the president.

Just before the files were released on Oct. 26, “Trump wrote in a memorandum that he had ‘no choice’ but to agree to requests from the CIA and FBI to keep thousands of documents secret because of the possibility that releasing the information could still harm national security,” Zeke Miller wrote in a report for NBC News.

“Two aides said Trump was upset by what he perceived to be overly broad secrecy requests, adding that the agencies had been explicitly warned about his expectation that redactions be kept to a minimum.”

White House Principal Deputy Press Secretary Raj Shah said on Oct. 27 that “The president and White House have been very clear with all agencies for weeks: They must be transparent and disclose all information possible,”

Trump’s tweets on the JFK files, one White House official said, were meant as a signal to the intelligence agencies to take seriously his threats to release the documents in their entirety.

According to White House officials, Trump eventually accepted that some of the files contained references to sensitive sources and methods and that declassification could harm U.S. foreign policy interests, but the president told aides he did not believe the full list of redactions the agencies presented him with lived up to the spirit of the law.

Trump tweeted on Oct. 27: “After strict consultation with General Kelly, the CIA and other agencies, I will be releasing ALL JFK files other than the names and addresses of any mentioned person who is still living. I am doing this for reasons of full disclosure, transparency and in order to put any and all conspiracy theories to rest.”