Report: Biden orders military occupation of D.C. to continue through Fall of 2021

Should we call it the Joe Biden regime? The new administration plans to keep the nation’s capital a militarized zone at least through the Fall of 2021, a report said. 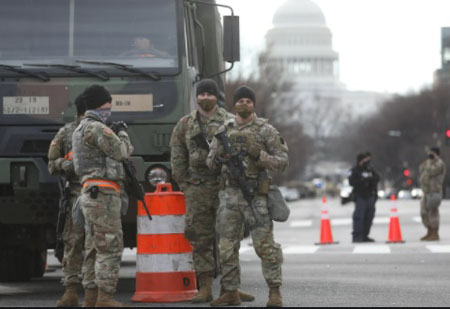 FOX 5 DC reported on Feb. 13 that Biden’s National Security Council is planning with the Department of Defense the support the military occupation of Washington beyond the currently-set March 12 deadline.

Fox 5 DC obtained an email in which Team Biden cited plans for a meeting Wednesday to discuss the specifics.

Robert Salesses, who began performing the duties of the Assistant Secretary of Defense for Homeland Defense and Global Security on Jan. 20, wrote in the e-mail:

“If it’s not possible to sustain at the current level with NG personnel, we need to establish the number of NG personnel (DCNG and out-of-state) we can sustain for an extended period – at least through Fall 2021 – and understand additional options for providing DoD support, to include use of reserve personnel, as well as active component.”

Defense Secretary Lloyd Austin has approved a plan to retain 7,000 National Guard soldiers and airmen in Washington through March 12 and then 5,000 indefinitely beyond that date, Army and National Guard officials have said.

The National Guard released a vague response when pressed for a comment by FOX 5 DC: “The National Guard is conducting prudent planning for the eventual end of the security mission and the return of its Soldiers and Airmen to their home stations.”

As Big League Politics put it: “Welcome to the United States of Fallujah.”

“It is official: The Bill of Rights and Constitution are no more. The troops will remain in the Capitol as a reminder to Americans that they no longer live in a free country,” the site added.

The ridiculous façade of the Biden administration promoting national unity is collapsing already, with the incoming president claiming he will use federal resources to paint Trump supporters as “domestic terrorists.”

Biden will be creating yet another task force to focus on Trump supporters and profiling their activities. He is pledging to have federal spooks harassing, provoking and undermining America First patriots throughout his four-year reign.

Even though what the Capitol demonstrators did would have fit the media’s definition of a “mostly peaceful protest” by the ANTIFA/BLM standard, Biden is intent on making an example of those participants in the rally as well as all Trump supporters.