Democrats on Monday attempted to bolster their case against President Donald Trump by claiming their one-sided “impeachment” hearings are not political. 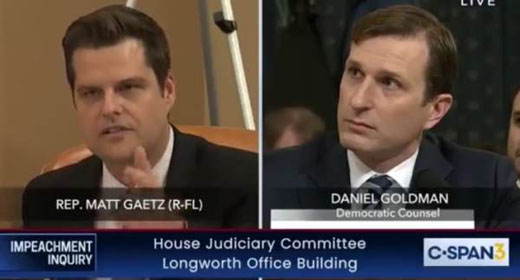 They trotted out “non-partisan” counselor Daniel Goldman to help make their case for impeaching the president.

Asked by Gaetz if he thought he was non-partisan, Goldman replied, under oath: “I am not a partisan.”

Gaetz then asked the Republican counselor at the hearing, Stephen Castor, if he had ever given political donations. He said no.

Gaetz continued by pressing Goldman on the tens of thousands of dollars in political donations he has given to Democrats. Goldman responded that he was performing a civic duty: “I think it’s very important to support candidates for office.”

Gaetz then displayed a posterboard with a tweet Goldman had posted in 2018. Goldman, responding to a tweet in which Trump mention’s the “Fake Dossier”, wrote: “What lying? Nothing in the dossier has proved to be false (including your pee tape). But we can agree that we all look forward to the facts coming out. Everything that has come out so far has shown you to be an out and out liar (eg Cohen tape, purpose of June 9 meeting, etc).”

Gaetz then asked Goldman whether he regretted posting the tweet. Goldman declined to answer, but did go on to insist that his inquiry was thorough. “I would be happy to put my — this investigation up with any of the non-partisan investigations during my ten years as a federal prosecutor.”

“You either regret it, or you don’t. I guess you don’t want to answer the question,” Gaetz said.

Breitbart News noted that Goldman had previously been an analyst on MSNBC and worked with the left-wing Brennan Center.

"As we sit here today, where you’ve got a tweet mentioning a 'pee tape,' presenting yourself not as a partisan, hired by the Democrats to pursue the President…do you regret this tweet?"#ImpeachmentHearings pic.twitter.com/oj6mtrPScu