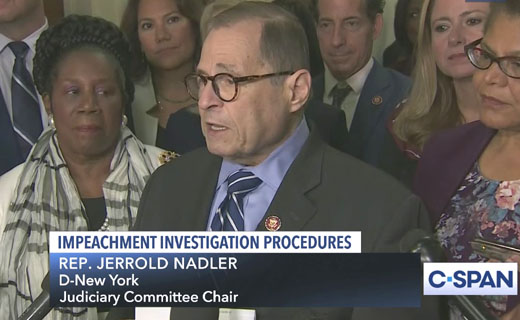 “[W]hat they’re trying to do is what the KGB under Lavrentiy Beria said to Stalin, the dictator — I’m not comparing our country to the Soviet Union — I just want to make sure it never becomes anything like that. Beria said to Stalin, ‘Show me the man, and I’ll find you the crime.’ And that’s what some of the Democrats are doing. They have Trump in their sights. They want to figure out a way of impeaching him, and they’re searching for a crime,” Dershowtiz said told host Mark Levin on the Dec. 8 edition of Fox News’s “Life, Liberty & Levin”.

“First, they came up with abuse of power,” Dershowitz said. “Not a crime — it’s not in the Constitution. So now they’re saying ‘bribery,’ but they’re making it up. There is no case for bribery based on, even if all the allegations against the president were to be proved, which they haven’t been — but even if they were to be proved, it would not constitute the impeachable offense of bribery.”

Appearing on Fox & Friends on Dec. 6, radio host Rush Limbaugh noted that Democrats needs to impeach Trump because they “don’t have anything to run on. They literally have nothing. They have sacrificed every bit of concern for the American people. They’re making no bones about the fact they really don’t care about the American people. The American people don’t want the president impeached! The American people love the economy. They love the robust new deals that we have made in the trade sector and in the wage sector. Look at the African-American unemployment, approval rating for President Trump. In three different polls, it’s around 34 percent. The Democrats are wandering aimless and they’re being propelled by one thing, you guys, and you’re watching it. We saw it this week with these three so-called expert witnesses. We’re watching pure, raw hatred.”

Speaking on House Speaker Nancy Pelosi’s public meltdown over being questioned on whether or not she “hates” Trump, Limbaugh said of Pelosi and her party: “They all do. Isn’t it funny, though, that Pelosi invokes her Catholicism on everything but abortion? When that comes up, you’d never know she’s a Catholic and she won’t talk about it. But I tell you, I’ll give you an example of this. Yesterday Pelosi said that we’ve got to impeach Trump because he wants to be a monarch. He’s saying Article II lets him do anything. Do you know what the context of that is? He was on with George Stephanopoulos… I went back and looked at this.

“He was on with George Stephanopoulos. He was talking about firing Mueller. Stephanopoulos was trying to make him guilty for wanting to fire Mueller. Trump’s answering, ‘I didn’t fire Mueller. I could have fired Mueller. Article II. I can do anything.’ She takes it totally out of context and tries to make it into something that it isn’t. She said yesterday in that press conference — and, look, the hate is dripping off of these people. It’s the one thing that’s noticeable. They literally hate. If you’ve wondered what hate is, it’s on parade in this impeachment. It’s on parade any time any Democrat goes on TV.

“It was on parade with those three so-called witnesses, those law professors. She said yesterday, ‘This really isn’t about Ukraine. It’s about Russia.’ About Russia? There’s no evidence. Do you realize they have not a shred of evidence for any allegation they have made about Donald Trump for 3-1/2, going on four years? There isn’t anything. Meanwhile, Trump keeps plugging away. The economy is roaring. Its future looks great. Wages are up. Trump’s job approval numbers are up. The Democrat Party does not care about the things the American people care about. Pelosi and her leadership are devoted to one thing.

“They are almost sickeningly absorbed with destroying Donald Trump. And they’re not gonna succeed at that, either.”