A formal protest on behalf of Republican Gov. Pat McCrory has been filed in North Carolina’s Bladen County over what was called a “blatant” scheme involving fraudulent absentee ballots that benefited gubernatorial candidate Roy Cooper and other Democratic candidates.

The protest included evidence of a “massive scheme to run an absentee ballot mill involving hundreds of ballots, perpetrated by and through the Bladen County Improvement Association PAC,” a political action committee funded by the N.C. Democrat Party and other prominent statewide Democrats, according to a Nov. 15 statement on the McCrory for Governor website. 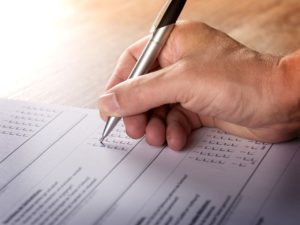 The county and state Boards of Elections are investigating.

Dowless had brought suspicions of voter fraud in his race for Soil and Water Conservation District Supervisor to the attention of the Bladen County Board of Elections prior to Election Day.

According to Bladen County Board of Elections officials, an “overwhelming number” of suspicious write-in votes cast for Democrat Franklin Graham in the race for Soil and Water Conservation District Supervisor appear to have “overtly similar” handwriting patterns on the ballots and witness signatures.

According to the protest, dozens of ballots appear to be filled out and witnessed by the same person without indicating that any voter assistance was provided, which would constitute voter fraud in violation of North Carolina election law.

The Bladen County Board of Elections allowed the ballots in question to be reviewed by a forensic handwriting expert who corroborated the account that numerous ballots were filled out by the same people. In addition to the write-in votes for Bladen County Soil and Water Conservation District Supervisor, the fraudulent absentee ballots appear to have been mostly straight ticket votes for Democrats in all other offices, including Cooper, the statement said.

The protest filed by Dowless calls for the invalidation of the fraudulent votes cast in the Soil and Water Conservation District Supervisor race in addition to all other votes cast in state, local and federal races listed on the ballots in question.

According to the McCrory website, “many of the witnesses who filled out and signed the fraudulent ballots in question have received financial disbursements from the Bladen County Improvement Association PAC for ‘G.O.T.V.’, according to disclosure reports filed with the State Board of Elections. It is illegal to exchange money for votes or to pay someone to commit voter fraud in the State of North Carolina and under federal law.”

Dowless listed several examples, including one very active absentee ballot “witness” who personally validated at least 67 mail-in absentee ballots and appeared to have written in Franklin Graham at least 71 times. The Bladen County Improvement Association PAC filed reports with the North Carolina State Board of Elections admitting they paid these individuals multiple payments for “G.O.T.V.” or “Get-Out-The-Vote” operations.

The McCrory campaign said it was “shocking evidence resulting from a blatant scheme to try to impact the voting results of an entire county and perhaps even sway statewide and federal elections,” including the gubernatorial race.

“With hundreds of fraudulent votes found in just one North Carolina county for a straight Democratic ticket, close examination of this election is required to make sure the true winner of the election is properly determined,” said Jason Torchinsky, legal counsel for the Pat McCrory Committee Legal Defense Fund. “Evidence of voter fraud in Bladen County and the number of similar PACs that the North Carolina Democratic Party donated to shortly before the start of early vote requires close examination throughout the state.”