President reveals his ‘great love’, but what of the forgotten Americans who elected him?

President Trump may have just committed political suicide. He announced that the Deferred Action for Childhood Arrivals, also known as DACA, will be rescinded, but only after a six-month delay. The reason: Trump wants to give Congress the opportunity to pass a legislative amnesty for the so-called “Dreamers.”

This would represent a major betrayal — one that would shatter his electoral base.

President Obama’s DACA executive amnesty was illegal and unconstitutional. It usurped Congressional authority, amounting to executive overreach. It was a naked power grab, whereby Obama unilaterally shielded over 800,000 young illegal aliens from being deported. They were also granted work permits that are renewed every two years. 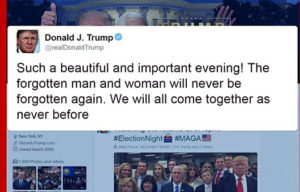 The Constitution is clear: Only Congress can change or alter immigration policy — not the president. DACA deserves to die. It’s not only bad policy; it’s bad law.

Yet, Trump should have simply rescinded it. Instead, he is phasing DACA out. His intentions are obvious. He wants Congress to pass legislation that would permanently enable the “Dreamers” to stay in America, putting them on a path to full legalized status and eventually, citizenship. White House Press Secretary Sarah Huckabee Sanders said that Trump favors “responsible immigration reform” when it comes to DACA.

After his announcement, the president proclaimed that he has “great love” for the young illegal immigrants protected by the DACA program. Trump said he hopes “Congress will be able to help them and do it properly.”

Translation: He favors a legislative amnesty for the “Dreamers.”

Trump may soon get his chance to sign a bipartisan, pro-amnesty bill. The Dream Act, originally sponsored by Sen. Thom Tillis, North Carolina Republican, is gaining considerable support in Congress. Tillis is a RINO globalist, who champions open borders and amnesty. He is an ally of the Chamber of Commerce and a puppet of the corporate lobby.

The donor class — led by billionaires such as Mark Zuckerberg, Jeff Bezos and George Soros — has given the establishment its marching orders: The “Dreamers” must stay. Paul Ryan, Lindsey Graham, John McCain, Nancy Pelosi, Chuck Schumer, Dick Durbin — all of them are now coalescing around a path to legalization for DACA illegal aliens.

The Dream Act would codify into law Obama’s executive amnesty. It would provide legalized status to over 2.5 million “Dreamers.” Hence, it would encompass not just the young illegal immigrants, most of whom range in age from 16 to 30, but their illegal parents as well. Within five years, provided they are working, going to school or serving in the military, they would attain permanent residency — a green card. They would then be eligible to attain full citizenship, including the right to vote. In other words, the bill would reward lawbreaking and those who entered our country illegally.

The first problem with the bill is that it does not — and it cannot — stop with the “Dreamers.” If they are allowed to permanently stay, then obviously they will petition the government to allow their parents and family members to remain as well. According to liberal logic, “families cannot be broken.” Hence, the Dreamers and their families will be given legalized status. This is why the Dream Act seeks to protect 2.5 million illegals rather than simply 800,000.

More importantly, a legislative amnesty will carve out a privileged exemption, thereby conferring special status, upon an entire class of people. It not only violates the rule of law, but undermines the basic principle of a self-governing republic: equality under the law. It places the interests of foreigners, especially those who entered America illegally, above those who obey and follow the law. It is a slap in the face to millions of legal immigrants — myself included — who respected U.S. sovereignty and its legal system. It rewards those who jumped the line at the expense of those who patiently waited, observed the rules and paid thousands of dollars (in my case, nearly $25,000) in legal fees and to acquire work visas and green cards.

The only reason the “Dreamers” are getting preferential treatment is because they’re part of a powerful (and growing) Hispanic ethnic bloc. This is a classic example of might makes right. George Washington must be turning in his grave.

If Trump were to sign any kind of legislative amnesty, it would shatter his political coalition and alienate large swathes of his voters. We did not elect him to make DACA permanent. We elected him to build the wall, deport all illegal aliens and restore law and order. The issue of the “Dreamers” has nothing to do with “heart” or “compassion.” The parents of these young illegals are to blame. They had no business — no right — to come to America in the first place — let alone bringing their children. The fault is theirs, and theirs alone.

I hope that Trump does not capitulate to political and media pressure. Yet, if he does — and it looks like he may — his presidency will be in real trouble.

Forget Robert Mueller, the hostile media, the Deep State or the obstructionist Democrats and RINO Republicans. It is the “Dreamers” who have the potential to break his presidency. He will pay dearly for betraying his voters. Mr. President, you cross us at your peril.

but what of the forgotten Americans who elected him?, Jeff Kuhner, President reveals his ‘great love’, WorldTribune.com