President Donald Trump responded to the release of Woodward’s “Fear” with a list of accomplishments in his first 600 days in office – 52 of them. 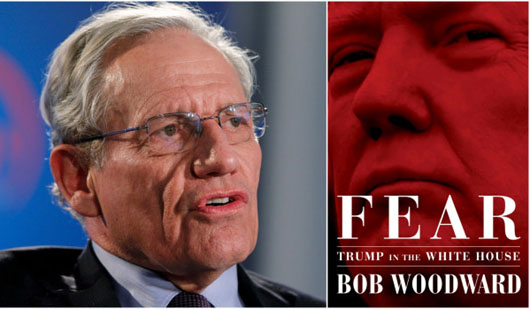 Meanwhile several high level sources cited in the book, including Chief of Staff John Kelly, have bluntly denied saying anything vaguely resembling the quotes attributed to them.

Such denials are reminding the Washington cognoscenti of questions raised about Woodward’s post-Watergate body of work. He has, after all, been accused of manufacturing quotes by comatose, dying and dead sources who are in no position to contradict his published work.

A notable example was his alleged interviews with former CIA Director William Casey who Woodward claimed admitted that he knew about the illegal diversion of monies from Iranian arms sales to the Nicaraguan Contras.

“In 2010, a former C.I.A. employee, who was part of Casey’s security detail, claimed Woodward ‘fabricated’ the story after being turned away from Casey’s room at Georgetown University Hospital,” the New Yorker reported of Feb. 28, 2013.

In columns for The Washington Times, Wesley Pruden wrote that “Mortuary Bob became a Washington legend for cultivating sources among both the quick and the dead.”

In his statement to Woodward, Trump said: “We’re doing better economically just about than at any time. We’re doing better on unemployment maybe than ever. You know, … if the other group had won, I will tell you, that you would have, I think you’d have a GDP of less than zero. I think we would’ve been going in the wrong direction. Because regulations are such a big part of what we’ve done, Bob.”

Best Conservative Books in the War of Ideas

In a 1996 essay for the New York Review of Books, Joan Didion wrote that “measurable cerebral activity is virtually absent” from Woodward’s post-Watergate books, which are notable mainly for “a scrupulous passivity, an agreement to cover the story not as it is occurring but as it is presented, which is to say as it is manufactured.”