Premeditated impeachment: Strategy required neither a crime nor GOP support

House Democrats are going to act fast on impeachment, without any evidence of an actual crime, and without the previously-required buy-in from the minority party, reports say.

In late 2018, The Conservative Treehouse reported that House Speaker Nancy Pelosi had enacted rule changes specifically geared toward impeachment. As a post explained, the Left is not outwitting average American conservatives. It is outworking them: 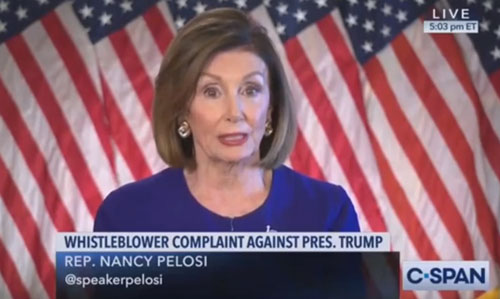 “When it comes to political weaponization and political power constructs the Marxists (Democrats) have exceptional work ethics; they will outwork anyone on the other side who opposes them. They are far, far, better at political strategy and scheme than conservative politicians. Part of the reason for their success is that crooks, cons and swindlers are far more cunning than honorable, virtuous and moral people. It is unfortunate, but true; and the same truth applies beyond politics.”

When the 116th Congress returns from their break on Oct. 15, the Articles of Impeachment will have already been assembled, reports say.

Pelosi “has to give the media some reference point to say the Republicans were included in the process, so she will likely have mid- to late-October destined for the committee chairs to have committee debate on their pre-assembled articles,” Zero Hedge said. “This will give the impression of minority participation, but it will be for optics only.

“Democrats are keen optical strategists and narrative engineers; and as you know they coordinate all endeavors with their media allies. The narrative assembly and usefulness by media to drive a tactical national political message will hit heavily in this mid/late October time-frame. This will allow the executive suites (media) to capture/stir-up maximum public interest and make the most money therein.”

Radio host Rush Limbaugh noted that ”the sheer power of the ruling class is what is on display here.”

“Nothing about this is genuine,” Limbaugh said. “There’s no real whistleblower who’s terribly alarmed and upset over what Trump said in a phone call. The whistleblower didn’t even hear it. It’s just the next phase. It’s the same play run to the different side of the line. Let’s put it that way. And the whistleblower report is the Steele dossier all over again. Some people think that it is the same technique with Christine Blasey Ford. But that whole thing was an extension of the original play.”

What it really is all about, Limbaugh said, is “overturning the election results of 2016. Why is that so important? It goes beyond just the fact that the deep state lost. I think what it’s about is what I have long thought it’s about. It’s about making sure the American people do not learn the extent of the corruption in the Obama administration and the Democrat Party at large, and particularly among these people in the deep state who did what they did to deny Trump his election victory.”

Limbaugh continued: “And that’s why Pelosi’s out there today saying that Bill Barr has gone rogue. If you need any evidence that they are scared to death of what Barr and his team are investigating as to the origins of all of this, Pelosi out of the blue saying that Barr has gone rogue, they are doing everything they can to destroy everybody on the other side of this.

“There’s nothing that’s true. You know what really is hard about this is that we’re dealing with nothing but a series of abject lies. Everybody on the Left is lying. Every allegation about this is a lie. Trump hasn’t broken any laws. Trump has not engaged in any corruption. In fact, Trump is the most investigated president in the history of the country, and they still haven’t found a crime! They’re still looking for a crime. They haven’t found a crime, so they’re making things up.”

Rep. Jim Jordan, Ohio Republican and ranking member on the House Oversight Committee, fired off a series of scathing tweets, ripping Democrats in general and Pelosi in particular for caving to “unrelenting pressure” and launching the impeachment inquiry the “socialist wing” of the party has been pressing “since the beginning of this Congress.”

Actually, Washington Times columnist Cheryl K. Chumley noted, Democrats and their media allies have been pushing impeachment since before President Donald Trump entered the Oval Office —some before he was even officially nominated by the GOP.

From The New York Times, in an opinion headline from Nov. 3, 2016: “Donald Trump’s Impeachment Threat”.

Yet Politico, on April 17, 2016, posted this a headline: “Could Trump be impeached shortly after he takes office?”

In his series of tweets posted after Pelosi announced an impeachment inquiry, Jordan wrote: “@SpeakerPelosi’s decision to pursue impeachment now — on the basis of unsubstantiated, indirect, and anonymous allegations — only shows that the [s]peaker has finally succumbed to unrelenting pressure from the Socialist wing of the Democrat Party.”

Jordan added: “This was never about Russian collusion or Ukrainian prosecutions. It is all about undoing the 2016 election and the will of the American people.”

Chumley concluded: “Have to agree. So should you.”