Americans who live in areas that have been hit hard by rioting by Black Lives Matter Marxists and Antifa anarchists are supporting President Donald Trump by a large margin, a new poll found. 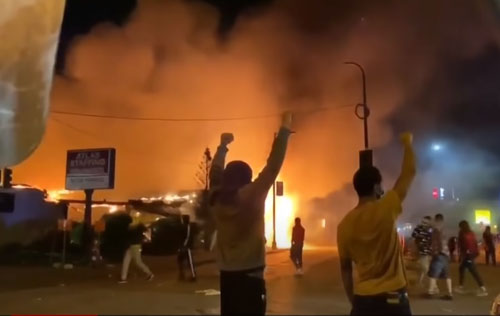 In the latest Rasmussen Reports survey, 63 percent of voters who have seen violent protests in their community “strongly approve” of the president. Just 35 percent don’t.

“The survey is the latest showing Trump winning the ‘law and order vote’ as the country sees violence from the protests expand from big cities to smaller communities, such as Lancaster, Pennsylvania,” Washington Examiner columnist Paul Bedard noted.

Trump’s “law and order” position has also boosted his overall approval rating. Rasmussen said that Trump’s approval rating is 51 percent. At this stage of his presidency and re-election campaign, former President Barack Obama had a 49 percent approval rating.

Rasmussen said that 42 percent of likely voters said that their communities have hosted anti-police “protests.” And nearly half said those protests turned violent, making them a big issue, even to those who haven’t witnessed the violence.

Said Rasmussen: “Among all voters, 65 percent say the violent protests are important to their vote in the presidential election this fall, with 41 percent who say it’s ‘Very Important.’

“Among those who have had violent protests in their community, even more (76 percent) rate them important to their vote, including 54 percent who say they are ‘Very Important.’ Sixty-three percent (63 percent) of these voters ‘Strongly Approve’ of the job Trump is doing versus 35 percent who ‘Strongly Disapprove.’ ”