China’s maximum leader Xi Jin Ping has more titles than most of his predecessors. He is president of the People’s Republic of China, secretary general of the Chinese Communist Party and Chairman of the all-powerful Central Military Commission.

None of this is to be taken lightly, and socialists of all stripe are not known for their sense of humor to begin with.

So when bloggers began comparing President Xi Jinping to Winnie the Pooh, the cuddly Pooh was knocked out of Beijing’s honey tree. Internet censors are now blocking images of the cartoon character.

“It is not only that China’s censors will not tolerate ridicule of the country’s leader, they do not want this beloved children’s character becoming a kind of online euphemism for the Communist Party’s general secretary,” Stephen McDonell wrote in the China Blog for BBC News on July 17.

“The Chinese authorities can just punch certain words or phrases into whatever blocking mechanism they use and shut down discussion of a topic.”

Having Winnie the Pooh as your mascot would be considered harmless, if not endearing in other countries – not in China, McDonell noted.

“Here the president is Mr Grey. He doesn’t do silly things; he has no quirky elements; he makes no mistakes and that is why he is above the population and unable to be questioned.”

Chinese netizens have posted images of Xi as Pooh alongside former U.S. President Barack Obama and, when Xi and Japanese Prime Minister Shinzo Abe “endured one of the more awkward handshakes in history,” they responded with Winnie the Pooh and Eeyore shaking hands.

China’s censors also “have been extremely successful at virtually wiping out the existence of the country’s number one dissident Liu Xiaobo – the winner of the Nobel Peace Prize who died in custody here last week – at least as far as the general public goes,” McDonell wrote.

Due to that censorship, most Chinese citizens “have simply never heard” of Liu.

“Everybody in China uses the Wechat App… and I do mean pretty much everybody,” McDonell wrote. “Sit down next to a friend who also has Wechat on their phone. Now try and send them a text message using the name ‘Liu Xiaobo’. On your phone it will appear as if you have sent the message but your friend will not get it. 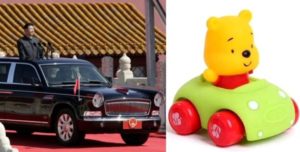 “And then there was the time President Xi popped his head out of the roof of his special Red Flag limousine to inspect the troops – a photo appeared online of a toy Winnie the Pooh popping out of his own little car,” McDonell noted.

Wechat is a privately owned company but China’s tech giants “must toe the Party line.”

McDonell noted that “Winnie the Pooh has actually fallen foul of the authorities here before. This renewed push against online Pooh is because we are now in the run-up to the Communist Party Congress this autumn.

“Xi Jinping will also be using the Congress, which marks the beginning of his second term in office, to further solidify his grip on power by promoting allies and sidelining those seen as a threat.”

That includes Winnie the Pooh. And Tigger had better not get out of line either.