Fusion GPS, which funded the discredited Trump dossier by a former British spy, is pulling out all the stops to keep a House committee from discovering who hired them.

The firm says that a House Intelligence Committee subpoena seeking its bank records could ruin its business and put the safety of its clients at risk, The Daily Caller reported on Oct. 24. 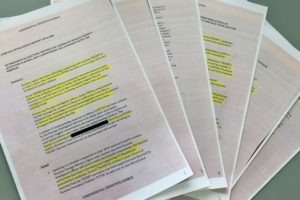 In a court filing, Fusion GPS argued the subpoena, issued earlier this month for TD Bank, will have a “chilling” effect on the First Amendment and privacy rights of it and its clients.

“In short, compliance with this subpoena will not only harm Plaintiff’s business, it has a high likelihood of ruining it,” reads one of the arguments presented by Fusion GPS in court papers filed in federal court in Washington, D.C.

On Oct. 20, lawyers for Fusion GPS and the House Intelligence Committee held a phone conference with U.S. District Court Judge Tanya Chutkan in which the opposition research firm argued that TD Bank should be blocked from complying from the subpoena, which was issued on Oct. 4.

TD Bank informed Fusion that it had compiled the firm’s bank records and was ready to comply with the subpoena by the Oct. 23 deadline. But Fusion was able to convince Chutkan to delay the subpoena by two days in order to hear arguments in favor of blocking the subpoena.

Chutkan, an Obama appointee, was expected to make a decision in the case by Oct. 25.

Who hired the firm for the dossier written by Christopher Steele has remained a closely-held secret since it was published by BuzzFeed in January.

Recent news reports have said Fusion GPS was first hired in September 2015 by a Republican “Never Trumper”. In June 2016, a Hillary Clinton ally had hired the firm to continue the Trump project and that is when Steele, a former MI6 agent, was hired to investigate Trump’s activities in Russia, reports said.