In fact, Mueller cited The New York Times on 60 occasions “mostly through footnotes for articles that weave through the report’s main narrative,” Rowan Scarborough noted in a May 5 report for The Washington Times. 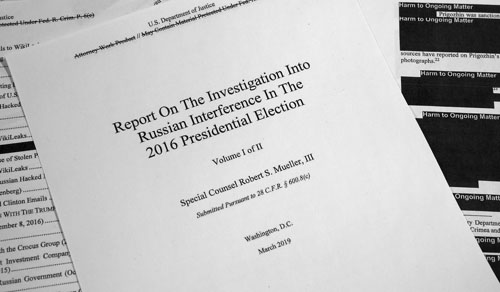 The report refers to The Washington Post at least 40 times. CNN about a dozen times. NBC News has about 10 story mentions, and its anchor, Lester Holt, is the lone journalist to appear in the report’s personalities glossary for his May 2017 interview with President Donald Trump.

Scarborough noted that “For more than two years, The New York Times suggested a Kremlin conspiracy in its stories and editorials and won a Pulitzer Prize — as did The Post. The Times focused on listing Russian contacts with Trump associates. Some purported Trump links, such as a line of communication with Kremlin intelligence, didn’t occur.”

Volume I of the Mueller report, the section on Russian election interference, features news media citations to set the atmosphere in Washington.

Volume II, the section on potential obstruction of justice, uses media stories to show what Trump was hearing as he talked inside the White House of ousting Mueller and tweeted complaints about the special counsel’s “18 angry Democrats” which, Scarborough noted, “was a common Trump insult for Mueller’s hand-picked staff of Democratic Party donors.”

The Mueller report’s description of the June 9, 2016, Trump Tower meeting cites a Washington Post story, “What we know about the Trump Tower meeting,” among other sources, for the following: “President Trump has stated to this Office, in written answers to questions, that he has ‘no recollection of learning at the time’ that his son, Manafort, or Kushner was considering participating in a meeting in June 2016 concerning potentially negative information about Hillary Clinton.”

The section on retired Army Lt. Gen. Michael Flynn and his termination as national security adviser is set in motion by references to the news media. “The Media Raises Questions About the President’s Delay in Terminating Flynn,” the report’s subtitle says.

In another lead-in, the report says, “The press also continued to raise questions about connections between Russia and the President’s campaign.” A footnoted article for that sentence is a February 2017 CNN story that declared, “Trump aides were in constant touch with senior Russian officials during campaign.”

The Mueller report doesn’t confirm this CNN assertion and found no Trump-Russia conspiracy to interfere in the election.

The New York Times reported that same month that the U.S. collected a year’s worth of intercepts and phone records between the Trump campaign and Russian intelligence. Comey later told Congress that the story was almost completely wrong.

The Mueller investigation cites no such communications.

Scarborough also noted that Mueller’s report “also quotes from one of the most famous, or infamous, stories in the long Trump-Russia saga.”

On Sept. 23, 2016, Yahoo News investigative chief Michael Isikoff wrote, “U.S. Intel Officials Probe Ties Between Trump Adviser and Kremlin.” It was the first story to quote the Christopher Steele dossier, though neither the former British intelligence officer nor his document was directly cited.

On a trip to Washington, Steele told Isikoff that volunteer Carter Page, while in Moscow to deliver a public commencement address, met secretly with two Putin associates and was offered a huge bribe to end U.S. sanctions, and Page accepted.

Page has consistently denied Steele’s story and other charges in the dossier. The FBI wiretapped him for a year. He was not charged.

The Mueller report described the Yahoo story this way: “On September 23, 2016, Yahoo! News reported that U.S. intelligence officials were investigating whether Page had opened private communications with senior Russian officials to discuss U.S. sanctions policy under a possible Trump Administration.”