Four more counties have signed on to support the Wisconsin Full Forensic Cyber Audit Ad-hoc Committee which is requesting a full forensic audit of the 2020 presidential election the Badger State. 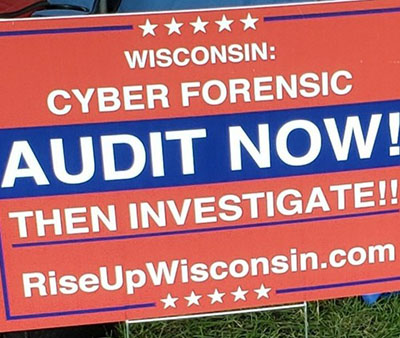 County GOP executive committees in Clark, Langlade and LaFayette counties have joined the audit movement, bringing the total to 13 counties.

“The Ad-hoc is also pleased to announce the Frederick Douglass Society of Wisconsin has now joined the growing effort to get to the bottom of election fraud and to make sure it never happens again in Wisconsin for all voters of all political party affiliations,” the committee said in a statement.

The committee said the “extremely high standard” of getting all 72 of Wisconsin’s counties in the fold supporting the full forensic cyber audit by Friday, Aug. 20 “appears to be well within reach.”

On Aug. 6, thousands of activists gathered at the state capitol in Madison for an “Audit the Vote” rally to call on leaders in the state legislature to order a forensic audit of the 2020 election.

Former Milwaukee County Sheriff David Clarke, who organized the rally, said: “We the people must never surrender our right to scrutinize election results,” adding that state legislators “were sent here to carry out your will, not theirs.”

Republican state Rep. Janel Brandtjen, who chairs the Wisconsin Assembly’s Committee on Campaigns and Elections, also spoke at the rally, which was held just hours after Brandtjen issued subpoenas for election materials in Brown and Milwaukee counties. Brandtjen told attendees she wants to get access to ballots cast in those counties, as well as the voting machines used there, to conduct a forensic-style audit.

“You deserve to know the truth, and it has been a long process,” Brandtjen told the crowd. “It is my job as a representative to do oversight … we are going to fulfill that obligation.”