Every now and then the mask is lifted and the true ugliness of the horrific communist Chinese regime is displayed.

The Chinese Embassy in Washington repulsed the civilized world this week with a cruel tweet boasting that its genocidal campaign against its Uighur minority has been a boon for “gender equality and reproductive health” for Uighur women, who no longer had to be “baby-making machines” thanks to the population control tortures they have been subjected to. 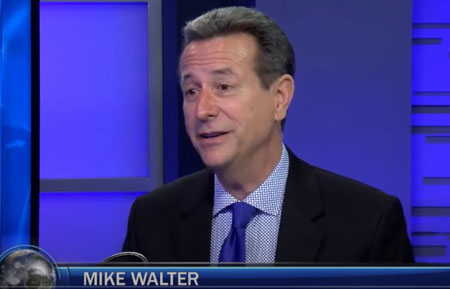 But for some Americans living comfortably among us today, brutalizing propaganda of this sort is not only not beyond the pale. It is part of their job.

These are the American television news veterans working as broadcasters for China’s state-run media propaganda organs.

Mike Walter worked at WUSA-9, the CBS affiliate in Washington, D.C. for close to six years. He now serves as the main anchor for CGTN America. Walter is just a regular guy who loves to tweet about the NFL team formerly known as the Washington Redskins and the NBA Wizards. Oh, and China’s spin on American tariffs.

In 2019, Walter sat down for what is actually a quite riveting interview with Jason McLure of Global Journalist, a program produced by the Missouri School of Journalism.

It is fascinating to watch Walter try to justify his employment with CGTN, as much to himself seemingly as to McLure, who does a fine job of holding Walter’s feet to the fire with his questions.

“We don’t have minders. We don’t have censors,” Walter asserts at one point. But his words take on an ominous tone soon after. Walter all but admits his role is to help whitewash China’s bloody Tiananmen Square reputation. 12:40 mark (bold added throughout this column):

Asked by McLure if this means Walter is being used as a tool for a soft-power diplomacy campaign by China, he replies:

“I don’t know that it’s soften… I think try to present a more accurate portrayal of China.“

Walter has no shame in defending his Chinese paymasters’ ruthless suppression of the Uighurs. 17:00 mark:

“The Uighurs, they are a minority. But there have been terrorist attacks carried out by Uighur minorities…. So I think this notion, you know, with my experience, 9/11. We have a Muslim ban in the United States. There are people who respond in certain ways when there’s a terrorist threat. My point is context. And I don’t see that in a lot of the reporting. I see the reporting as this minority, they’re persecuted, there’s no reason for this to happen. And I think the reasoning behind, you know, a concern in that area is what I just illustrated here.“

Challenged by McLure about the massive oppression of the Uighurs as a whole, he replies:

“So now let me ask you this. Is that a journalist who’s actually gone into one of these places and surveyed this? Or are these the accounts of people? My problem is, I’ve found in journalism, when people say it’s black and white, generally it’s gray.

Make no mistake. Walter is 100-percent parroting official communist Chinese rhetoric on its Uighur genocide. The “fighting terrorism” claim is literally a party line. It is something that CGTN frequently repeats with the help of American commentariat playthings who appear on its programming:

Tensions between China and the U.S. are rising over President Trump’s Uyghur Human Rights bill. Why is the U.S. pushing this bill and how will it impact China-U.S. relations in the future?https://t.co/LXJftClgfS pic.twitter.com/OU12vgfFLZ

China is denouncing U.S. President Trump for interfering in their internal affairs and signing a Uyghur Human Rights bill.https://t.co/JcVpYQAypR pic.twitter.com/CjdK54o2G6

Walter can also be seen conducting interviews with the compromised U.S. governors Secretary of State Mike Pompeo has warned of. American governors, transparently lusting after Chinese revenue streams, have been caught on video offering this nation’s sensitive defense industry, aerospace and rocketry technology to a Red regime that is avidly building a war machine that is capable of destroying U.S. forces in any future war.

Walter covered the 2018 annual summit of the National Governor’s Association in Santa Fe, New Mexico for CGTN. After interviewing the president of the state-owned Bank of China USA, who bemoans the inability to invest more inside the U.S. in the Trump era, Walter sums up his report as a true puppet would:

“So there’s a lot of hand-wringing here in Santa Fe. Because governors know, those are investment dollars that can be used to help grow their own economies. They’re nervous about this trade war. They know it’s bad for China, the United States and their own individual states. They’re just hoping it’s a short one.”

Note how Walter lays out the pleasant, canned TV reporter news-speak so familiar to Americans everywhere in this clip. It marks another jarring aspect of the CGTN America operation.

Activist Joshua Wong was jailed alongside two others on Wednesday for taking part in an unlawful rally outside the police headquarters last year, a court of the Hong Kong Special Administrative Region (HKSAR) has ruled.https://t.co/2ngxaySA2j pic.twitter.com/AszY4xG5nV

This would be Jonathan Betz, a former TV news broadcaster in New Orleans who now works on The World Today, a CGTN America program.

The attached link that goes with the Betz Hong Kong clip is frightening. This is the “journalism” package an American is part of:

“The defendants called on protesters to besiege the headquarters and chanted slogans that undermined the police force,” the judge said.

“Immediate imprisonment is the only appropriate option.“

The prosecution played several news video clips in court showing Wong and Lam inciting people to besiege the police headquarters during an unauthorized assembly on June 21, 2019. Chow was also involved.

The three are key leaders of political groups advocating for “Hong Kong independence” and have all been charged for similar reasons multiple times.

Elaine Reyes is another CGTN America anchor. Before signing up with the communists, Reyes was a reporter and fill-in anchor at the NBC affiliate in Washington, D.C. On her official Twitter bio, she proclaims herself to be “Wife, Mama, Southern Belle, Eternal Optimist #Football Fanatic.”

Reyes also has no problem seeking to soft-pedal the most leaden of Chinese propaganda talking points. A revolting yet wacky CGTN America interview in Nov. 2019 with Victor Gao, a “former interpreter for Deng Xiaoping” who “is chairman of the China Energy Security Institute and vice-president of the Centre for China and Globalisation,” according to the South China Morning Post, speaks volumes.

Reyes refers to Gao as “current affairs commentator” for CGTN America as she introduces him. Gao then proceeds to immediately engage in a tirade against Hong Kong protesters yearning for freedom:

“Well, first of all, whatever that is happening in terms of the escalating violence and atrocities are obvious for everyone in the world with a decency of the mind to see. Therefore, the top priority for Hong Kong is to restore law and order….

“Of course human rights need to be protected. But human rights should not give rise to any right to commit violence, especially in a densely populated city like Hong Kong.”

Gao ridiculously goes on to warn that if the U.S. Congress approved sanctions against China over Hong Kong it would be abetting dangerous activities that would eventually find their way to American cities.

Come to think of it, as supporters of President Trump become the new Hong Kong freedom warriors in our nation today, maybe Gao is right. Perhaps he knows exactly what our oligarchical members of Congress are about after all.

Needless to say, the segment was pure, undistilled hack commie propaganda. And it was all presided over by the smiling face of a woman who calls our country her home.

No, these particular individuals aren’t nearly as important as disgraceful Arizona Gov. Doug Ducey. But watching them perform their sickeningly saccharine duties on behalf of a murderous tyranny opens an intriguing window on the state of our nation today. In a highly materialistic age marked by increased atomization and the erosion of community ties, is it any wonder that people like Walter exist, leading cozy lives in this country while openly serving a hostile foreign power?

There are numerous specious ways to justify it, none that should be the least bit convincing to the consciences of men and women of integrity. “It’s a global world now,” after all.

But this wretched display should also serve as a warning about the ease in which U.S. media Ken and Barbie dolls are able to transition to putting on their plastic news reader act for the exact kind of out-and-out oppression that our Elites have in mind for us. If the growing menace of an American domestic tyranny does one day bloom in full measure, it will never find itself short of glowing TV faces willing to dance for it.