More than 1,800 flights into and out of Florida were either postponed or canceled over the weekend after air traffic controllers in Jacksonville reportedly conducted a “mass sickout” to protest the federal Covid vaccine mandate.

Big Media propagandists lined up behind an alternative explanation suggesting the outages were due to bad weather or active military training in the airspace. 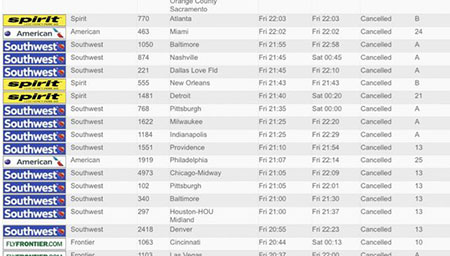 A union representing pilots at Southwest Airlines is suing to stop the federal vaccine requirement from being forced until a lawsuit is resolved.

“The new vaccine mandate unlawfully imposes new conditions of employment and the new policy threatens termination of any pilot not fully vaccinated by December 8, 2021,” the union’s legal representatives said in a court filing. “Southwest Airlines’ additional new and unilateral modification of the parties’ collective bargaining agreement is in clear violation of the RLA.”

According to the guidelines set out by Joe Biden (and “voluntarily” embraced by most of the major airlines), Southwest has a deadline of Oct. 4 under the federal mandate for employees to get jabbed or have an approved medical or religious exemption. Southwest is affected by the mandate because it has contracts with the federal government (like many large businesses).

It was also reported (and ignored by corporate media) that pilots had also participated in the weekend’s “sickout.”

ATC issues and disruptive weather have resulted in a high volume of cancellations throughout the weekend while we work to recover our operation. We appreciate your patience as we accommodate affected Customers, and Customer Service wait times are longer than usual. (1/2) pic.twitter.com/o1scQJ5lLb

Passengers were furious and letting Southwest have it. The 100percentfedup report cited some as saying:

“Bull. Your own employees working at the gate in the airport told everyone standing there that cancellation was due to employee protest of the vaccine mandate”

“This is absolutely horrible! Your lack of compassion & resolution is appalling! My sister has been left stranded in Atlanta while traveling en route to my Wedding scheduled for tomorrow. I am now driving round trip from FL to ATL on the EVE of my wedding!!”

“Keep lying when your staff at Midway specifically told us it was because the Pilots went on strike, because of your vaccine mandate. Now we missed a wedding and our luggage is stuck at midway with mine and my wife’s medication.”

Others noted there appeared to be a media blackout about the “sickout.”

Is there a media blackout on last night’s air traffic controller walkout in Jacksonville, FL?

Walkout due to vax mandate

From a trusted source: pic.twitter.com/kCseQMZlal

There was confirmation that Jacksonville was short-staffed on air traffic controllers.

There seems to be a major air traffic control issue impacting a significant number of flights in/out of Florida.

Seems to be re: staffing at regional ATC ops in Jacksonville. @MCO has dozens of canceled flights. Awaiting word from @FAANews. pic.twitter.com/3ddKGcKXvU