Limbaugh: Who was vulnerable to Russian blackmail? Hillary, that’s who

The “Drive-By” media, which now sees a Russian under every bed, gleefully trotted out the charge that Michael Flynn was open to blackmail due to his phone conversation with Russia’s ambassador, Rush Limbaugh noted in his Feb. 14 broadcast.

“Are we serious about this? Flynn was open to blackmail? Who was it that the Drive-Bys wanted to see as president? That would be Hillary Rodham Clinton, who could have been blackmailed six ways from Sunday by the Russians and who the heck else we know. 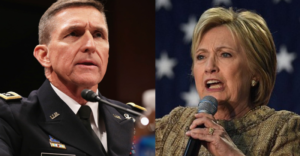 The ouster of Flynn (who had held four positions in the Obama administration) was a “political assassination,” Limbaugh said.

Flynn “has a reputation as a great man, Limbaugh said. “He’s also a hawk. And that’s something the left just can’t abide.

“So we have a resignation over a phone call, a freaking phone call. The Democrats don’t resign when they’re caught red-handed with their hand in the till or in bed with an intern or whatever else transgression the Democrats engage in. There are no resignations and there are no demands for resignations.”

Limbaugh continued: “If you want to compare the Trump administration to the Obama administration, you just need to ask yourself one question: Why did you vote for Trump?