Leadership: Life is good in the Free State of Florida

There is a word for this: Leadership. The leftist mob was outraged. 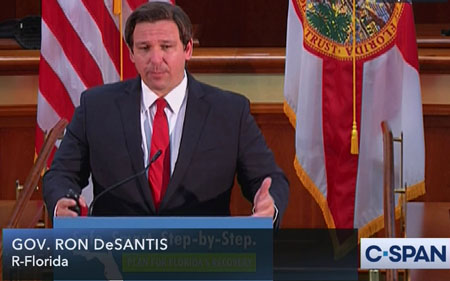 “Someone said, ‘Hey, you were at the Super Bowl without a mask,’ ” DeSantis said Monday, according to Politico. “But how the hell am I going to be able to drink a beer with a mask on? Come on. I had to watch the Bucs win.”

The Karens in the media also noted that DeSantis was “seated in what appears to be an executive suite at Raymond James Stadium and speaking with another person seated to his left who was less than six feet away.”

There is no mask mandate in the Free State of Florida which boils the blood of Democrats and their media comrades. Absolutely unacceptable.

Small businesses have not been shut down and ruined. And what’s worse, the Free State of Florida has lower covid mortality rates than locked-down Blue States such as New York.

“I’m opposed to mandates period. I don’t think they work,” DeSantis said in November. “People in Florida wear [masks] when they go out. They don’t have to be strung up by a bayonet to do it.”

So, DeSantis brushed off the leftist mob, enjoyed his beverage and the Big Game in the stadium in the Free State of Florida.

The Tampa Bay Buccaneers indeed did win, 31-9, over the Kansas City Chiefs. Which only made matters worse for the Left. You see, Tampa Bay quarterback Tom Brady had once, years ago, been photographed with a — gasp! — MAGA hat in his locker, which in the eyes of the Left and its propaganda arm known as the corporate media makes him a “domestic terrorist.”

The Left does not take kindly to those who do not follow their rules in lock step. In their eyes, DeSantis and all others who enjoyed the Super Bowl and enjoy life in the Free State of Florida are nothing more than grandma-killing superspreaders.

So, why then, are one thousand people per day moving to the Free State of Florida, a great many of them from heavily locked down Blue States?

People are living their lives on their terms. People are smiling. More people want to be a part of it. The Left is not happy.