John Kerry has some advice for energy industry workers who lost their jobs when Joe Biden shut down the Keystone XL Pipeline — go learn to make solar panels. 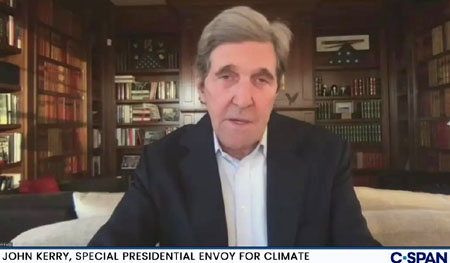 Kerry, who is serving as the U.S. Special Presidential Envoy for Climate, was asked during a press briefing at the White House on Wednesday what his message is to workers who are “seeing an end to their livelihoods” due to the cancellation of Keystone and other Biden job-killing energy policies.

Kerry said that Biden “has expressed in every comment he has made about climate the need to grow the new jobs that pay better, that are cleaner,” adding that Biden intends to “do what needs to be done to deal with this crisis.”

Biden, according to Kerry, wants to make sure those who lost their jobs because of his executive orders “have better choices, that they have alternatives, that they can be the people to go to work to make the solar panels.”

Whether or not they are able to provide for their families in the meantime is meaningless to the elite overlords in the D.C. Swamp.

A man who knows two people who worked on the Keystone XL Pipeline took to social media after Biden fired the 10,000 mostly-union workers:

“It just doesn’t f***n make any sense. It doesn’t make any sense. HOW! Did Donald Trump… I know how – They took it! They didn’t steal the election. When you steal something that’s when no one knows that you took it. But they outright boldly went in and said, “We’re gonna f****g take this presidency from you. Screw the American people. Screw you, Donald Trump. Screw everybody! America last! Oh, and by the way, you guys are going to lose your job!”

When asked by one of the few remaining actual reporters in D.C. about the sacrifices he’s asking Americans to make, Biden and his team simply walked away.

The corporate media practices accountability journalism only as directed.