The comprehensive recount of Maricopa County’s 2020 election ballots is continuing despite a lawsuit by Democrats attempting to block it. 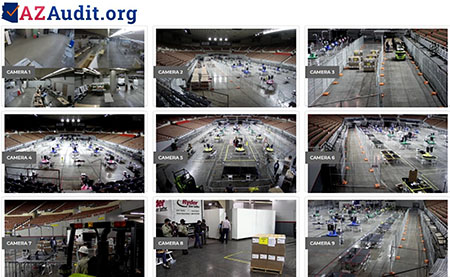 The Arizona Democratic Party and the Maricopa County Supervisor Steve Gallardo filed the last-ditch lawsuit to stop the recount in which a judge ruled the state Senate could access 2.1 million ballots and the tabulation machines used to count them.

A judge ordered a temporary halt to the forensic review Friday to see if Democrats would be willing to post a $1 million bail to back an appeal. The Democrats did not, and the audit then continued.

“The Republican Party is demanding that Governor Ducey of Arizona immediately provide large-scale security for the brave American Patriots doing the Forensic Audit of the 2020 Presidential Election.

“Governor Ducey will be held fully responsible for the safety of those involved. State police or National Guard must be immediately sent out for protection. The Democrats do not want to have this information revealed, and they will do anything to stop it. Governor Ducey must finally act!”

The county handed over the ballots Thursday to Cyber Ninjas, the firm that is leading the audit and led by Doug Logan. Logan’s team is using the state fairgrounds, which the Senate rented after the Maricopa County Board of Supervisors refused to allow use of its facilities.

State Senate President Karen Fann, a Republican, said the ballots are protected by bonded and certified 24-hour security forces, kept in locked cages and a public live stream is on 24 hours a day.

The auditors selected by the Arizona state Senate are providing video access to audit activities in real-time.

For the duration of the audit, those who wish to see what is happening at the fairgrounds will be able to log on to AZAudit.org and watch the audit while it is happening.

The audit of the Maricopa County ballots includes volunteer observers from all political parties as well as independents, according to Patrick Byrne of The America Project. The audit will be conducted between April 22 – May 14. Observers are working in 6-7 hour shifts. There will be 2 shifts per day with 40 volunteers per shift for approximately 28 days.

ARIZONA AUDIT UPDATE: Maricopa County looks to be searching for special watermarks on the ballots pic.twitter.com/XU4ZxzvlbK

In December Jovan Pulitzer gave a presentation with the Economic War Room on how he and his company can detect many types of election fraud with a simple, easy examination of the physical ballots, by running them through forensic machines designed to detect physical signatures of the ballots.

Meanwhile, three Republicans running for Virginia governor are raising concerns about the security of an electronic ballot-counting system to be used at the party’s May 8 nominating conventions, saying the technology cannot be trusted, a report said.

Convention ballots are typically counted by hand. But the already complex process is expected to be even more challenging this year because more voters are expected to participate and the party will use a complicated system of ranked-choice voting.

“The current method for counting, tabulating, and calculating the votes being recommended by the Rules Committee utilizes untested and unproven software that creates uncertainty, lacks openness and transparency, and is inconsistent with our calls as a party for safe and secure elections,” the three candidates wrote in the letter, which raises concerns similar to those made in the 2020 elections about the integrity of balloting software and overall election integrity.

At least one company is known to have presented the committee with an electronic voting-counting system, Blue Ridge Software Consulting, which says it can handle complex calculations and a large number of ballots, according to the Post.