Having already used their newly gained power to launch assaults on the First and Second Amendments, the Democratic majority in Virginia now has its sights set on helping to essentially eliminate the Electoral College.

The Virginia House of Delegates on Tuesday approved a bill to join the National Popular Vote Interstate Compact (NPV), which would award the state’s 13 electoral votes to the winner of the national popular vote. 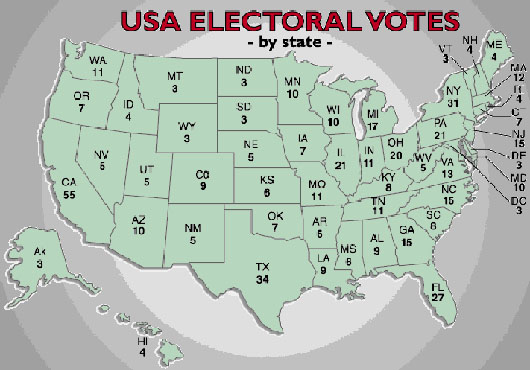 Democratic Del. Mark Levine, one of the bill’s two sponsors along with Del. Marcia “Cia” Price, argued that the Electoral College was a throwback that “began at a time when the founders actually didn’t think that there would be political parties.”

“They thought that a bunch of white men with property would get in a room in the back and they would decide who the president was,” Levine said during Monday’s floor debate. “It even had the infamous 3/5 clause, which meant that the more people were enslaved, the more slave owners had representation.”

The state House voted 51-46 to join the compact. One Democrat joined all Republicans in voting against the bill.

The bill now goes to the state Senate, in which Democrats hold a 21-19 majority. If the bill is signed into law by Democratic Gov. Ralph Northam, Virginia would join 15 states and the District of Columbia in the agreement to have their electors cast their ballots for the presidential candidate who gains the most popular votes nationwide, instead of the statewide winner.

The compact would take effect after securing states with a combined 270 electoral votes, the number needed to elect the president. Virginia’s 13 electoral votes would bring the total to 209.

All of the states (and the District of Columbia) who have thus far signed onto the pact voted for Hillary Clinton in 2016. The pact’s signatories are: Maryland, New Jersey, Hawaii, Washington, Massachusetts, Vermont, California, Rhode Island, New York, Connecticut, Colorado, Delaware, New Mexico and Oregon.

“We are determined to achieve 270 or more electoral votes,” said National Popular Vote chairman John Koza. “We will be dogged in our approach to attract Republicans, Democrats and independents who believe there is a better way to elect the President of the United States.”

Opponents of compact say that doing away with the Electoral College would mean California and New York City would decide the outcome of every presidential election.

“Virginia currently assigns its electors to reflect the opinions of voters in the Commonwealth, and this bill might as well have an amendment stating that our electors will be chosen by the State of California,” said Virginia GOP Del. Israel O’Quinn. “Virginians should choose who gets Virginia’s 13 electoral votes — not a handful of large states.”

Nevada Gov. Steve Sisolak, a Democrat, made the same point last year when he vetoed a National Popular Vote bill, saying it would “diminish the role of smaller states like Nevada in national electoral contests and force Nevada’s electors to side with whoever wins the nationwide popular vote, rather than the candidate Nevadans choose.”

The Conservative Action Project said in a statement: “Conservatives must defend the Electoral College as a bulwark of constitutional federalism and republican governance. “Checks and balances” have not gone out of date. Neither have limits on majority power. The Electoral College worked exactly as designed in both 2000 and 2016 to prevent a collection of major urban areas from controlling the presidency. It rewarded the outreach and coalition building of the Trump campaign rather than the Clinton campaign’s preference to rile up its base in California while labeling broad swaths of Americans a “basket of deplorables.