Election Night may appear to give President Donald Trump a landslide victory, but when all the mail-in ballots are counted up to a week later, Joe Biden will win the presidency, a Democrat data firm said. 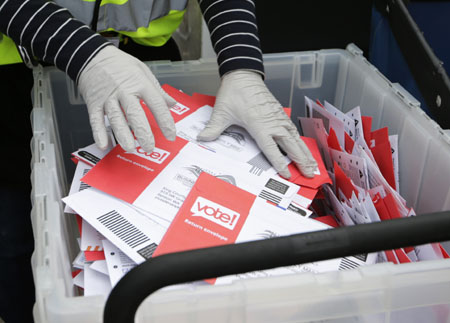 “We are sounding an alarm and saying that this is a very real possibility, that the data is going to show on election night an incredible victory for Donald Trump,” Hawkfish CEO Josh Mendelsohn said in an interview with “Axios on HBO.”

“When every legitimate vote is tallied and we get to that final day, which will be some day after Election Day, it will in fact show that what happened on election night was exactly that, a mirage,” Mendelsohn said. “It looked like Donald Trump was in the lead and he fundamentally was not when every ballot gets counted.”

One scenario the Democrat data firm envisions is Trump holding a projected lead of 408-130 electoral votes on election night, if only 15 percent of the vote by mail ballots had been counted.

“The ultimate results may well sit somewhere between these low-end and high-end scenarios and will also be impacted by who actually votes, and how voters’ views about their options change over the coming weeks,” the data firm said.

“The Democrat-media complex is keeping covid in the news cycle so they can push for mail-in ballots instead of voting in person for the 2020 election,” the Gateway Pundit’s Cristina Laila noted.