President Donald Trump lowered the corporate tax rate in 2017. Corporate America thanked him by abandoning him in 2020, a columnist noted. 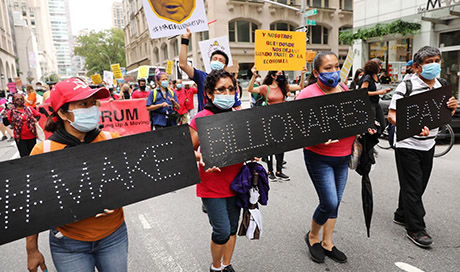 In response, the “turncoats must be punished,” Don Surber noted in his March 16 blog.

“Supporting a tax increase strikes against what I stand for,” Surber wrote. “But there is a part of me that says go for it. Punish the bastards.”

Joe Biden’s team has floated an increase in the corporate tax rate from 21 percent to 28 percent.

“In fact, why stop at 28%? Make it 56%. Apple, Google, and Nike all side with Red China now. A confiscatory tax will hurt the economy? Piffle. Covid-19 already destroyed it,” Surber noted.

Besides, Surber added, “none of these companies showed even an ounce of gratitude for President Donald John Trump’s 2017 corporate tax cut. They worked to elect Chairman Xiden.

“We must exact a price for their disloyalty. Politics must be played to win. Turncoats must be punished. Savagely. Corporate America has abandoned the American people. We must return the favor.”

Jeff Bezos and Bill Gates, Surber wrote, “believe they can take conservatives for granted by pushing that Maoist Democrat agenda. Call it a social justice warrior tax. Bill them for the ever-growing government they want. Let Mark Zuckerberg and Oprah pay for reparations.”

Surber continued: “Trump supporters helped Make America Great Again. We were harassed. We were called deplorable. We were sent to the children’s table.

“The Buffetts and Elon Musks of the world reaped billions. And they rewarded us by stealing the election.

“After 2020, they need to find someone else to carry their water on taxes because I really don’t feel up to protesting a tax hike right now.”