Most of the nation reacted in horror to the news that three women and six children, all part of an extended family of U.S. citizens, were murdered by a Mexican drug cartel.

That horror did not extend to the major media, some of which were all too eager to defame the memory of the dead Americans, a columnist noted. 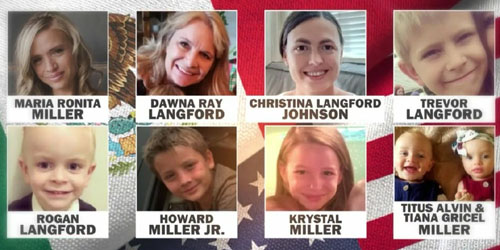 RedState columnist streiff on Nov. 5 cited a tweet from the New York Post on an article written by Emily Saul, Andrew Denney and Kate Sheehy which said that the nine women and children slaughtered in Mexico were part of a Mormon community with ties to the alleged sex-cult Nxivm.

The Post’s report said: “The outpost Mormon community in Mexico is where underlings of Nxivm leader Keith Raniere recruited young women to work as nannies in an upstate New York compound run by the accused cult — suggesting at least in part that the jobs would get the girls away from their home region’s drug violence, according a man hired by Raniere to produce a documentary about the group.”

RedState’s streiff wrote: “The takeaway from that tweet seems to be ‘she had it coming.’ Note there is absolutely nothing in the story that links the individuals to the ‘alleged sex-cult.’ It is just a cheap, and petty shot taken at some dead Mormons who the New York Post effectively ‘othered,’ to use the vernacular of the nation’s newsrooms and Antifa salons, in order to cast aspersions on people whose unforgivable crime was to live their faith. And clickbait. Let’s not forget the importance of clickbaiting their deaths.”

The New York Times, meanwhile, may not have associated the dead Americans with a “sex-cult,” but did get “heavily into the business of making the Mormon families sound weird and perhaps complicit in their fate,” streiff noted.

The brutal killing of nine members of a family in northern Mexico on Monday highlights the long history of American religious settlers in the region.

The LeBarón family, some of whose members were targeted in Monday’s attack, has lived in the turbulent border region for decades, part of a wave of settlers who moved to Mexico in the early 20th century seeking at the time to practice polygamy, which was forbidden by The Church of Jesus Christ of Latter-day Saints. Today polygamy has largely faded from the community.

It is difficult to estimate the number of families in the northern Mexico region that still practice polygamy, but it is “very small,” Professor Reeve said. He estimated that in Utah there are about 30,000 people who are part of fundamentalist, polygamous Mormon sects.

The settlements in northern Mexico have been plagued by violence in the past. In 2009, gunmen in the town of Colonia LeBarón killed Benjamín LeBarón, a Mormon anti-violence activist, as well as his brother-in-law, Luis Widmar. The town had been settled in the 1940s by Alma Dayer LeBarón, a Mormon patriarch who was excommunicated for polygamy.

A splinter group from the area led by a polygamous LeBaron descendant, Ervil LeBaron, carried out killings of opponents in Mexico and parts of the United States. Ervil LeBaron died in a Utah prison in 1981 at the age of 56.

RedState’s streiff wrote: “Take any other ethnic or racial group in America which had been hit by a similar tragedy, write a comparable headline, and try to get it published. This goes to a core problem America faces today in dealing with the coastal elites who flatter themselves that they are our rulers.

“Those weren’t innocent women and children going to a wedding who were ambushed and executed by narcotraficante assassins. They were members of some weird-ass polygamy cult who were part of an illegal sex-cult to boot. They don’t even mention their names.

“We are just bugs pinned to corkboard as far as they are concerned. We aren’t all that human, we really aren’t deserving of a lot of sympathy or empathy, and if we get slaughtered in an ambush…well, you know how those people are, right?”