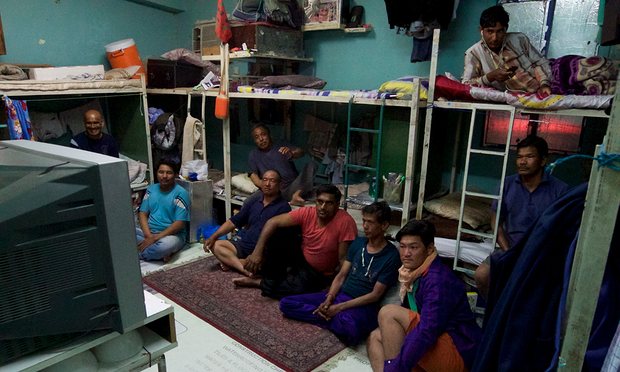 by WorldTribune Staff, June 7, 2016 The huge migrant workforce in Qatar has swelled to 1.4 million, making up 58 percent of the country’s population. The overwhelming majority of foreign workers – 1.34 million – are male and live in what the government calls “labor camps”, according to census figures released on June 5 by […]

CENTCOM deploys B-52 bombers against ISIL

Special to WorldTribune.com The United States has deployed B-52 bombers to join the fight against Islamic State of Iraq and Levant (ISIL). In the first use of the Cold War-era bombers in the Middle East since the war in Afghanistan in 2006, the U.S. Air Force said the B-52 Stratofortress aircraft arrived in Qatar on […]

Special to WorldTribune.com Al-Jazeera announced on Mach 27 it was cutting 500 positions, most of them at its Doha headquarters. The Qatari state-funded broadcaster has slashed more than 20 percent of its global workforce this year. Earlier this year, Al-Jazeera cut 700 jobs when it closed Al-Jazeera America. The network said Al-Jazeera English would remain […]

Special to WorldTribune.com Qatar’s decision to pull the plug on Al Jazeera America is seen as an indication of its new leader’s “more cautious” approach in the international arena. Emir Sheikh Tamim bin Hamad al-Thani shut down Al Jazeera America after Qatar pumped some $2 billion into a U.S. network that had abysmal ratings since […]

Special to WorldTribune.com Radio Free Europe / Radio Liberty The Sunni Arab monarchies of the Persian Gulf have expressed support for Saudi Arabia in its diplomatic row with Iran, condemning what they described as Iranian interference in Riyadh’s internal affairs. Meanwhile, Saudi Arabia accused Iran of sponsoring terrorism and warned that the kingdom was considering […]

Woe is not us: From one new energy revolution (shale gas) to another (fire ice)

Sol W. Sanders   As the shale gas revolution begins to ripple through, reordering the world economy, another fossil fuel revolution is in the offing which will again torpedo most conventional wisdom concerning energy. So-called “peak oil”, the end of petroleum exhausted by expanding consumption and diminishing discoveries, the love story of environmental fanatics, has […]

Special to WorldTribune.com By Cliff Kincaid If Homeland Security Committee Chairman Rep. Michael McCaul (R-Texas) lets the Al Jazeera-Al Gore deal go through without scrutiny, then every broadcast entity or communications facility in America is ripe for the plucking by any of our nation’s enemies and adversaries. For those who haven’t been paying attention lately, […]