Mike Bloomberg’s campaign for the Democratic presidential nomination, funded by the billionaire’s own enormous personal fortune, has barely gotten off the ground. But he has already “exposed fatal political weakness,” a columnist noted. 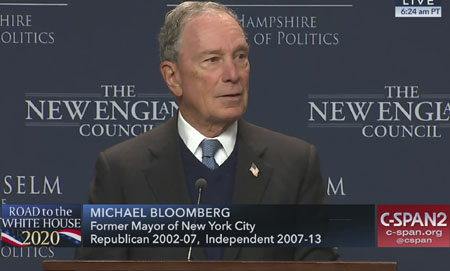 “At the first whiff of criticism, he folded, apologized and repudiated the law-and-order policies that were his greatest legacy as mayor” of New York City, Miranda Devine wrote for the New York Post on Feb. 12.

“No wonder President Trump called him ‘a lightweight,’ as Bloomberg squirmed to dodge the fallout from an old speech justifying the NYPD’s crime-fighting stop-and-frisk program,” Devine wrote.

In the 2015 speech, Bloomberg said: “You’ve got to get the guns out of the hands of people … to stop [kids] from getting murdered.”

So, Devine asked, why apologize for policies that took guns off the streets and saved black lives?

“Now, in the name of anti-racism, those policies have been dismantled and, presto, shootings are up 30 percent,” Devine wrote. “Those who suffer most are in black neighborhoods, where an innocent child like 14-year-old Aamir Griffin was killed by a stray bullet last year while playing basketball in Jamaica, Queens.”

Devine continued: “Instead of cravenly disavowing his record, a Trumpian or Sandersian politician would turn the argument aggressively back on his critics. He would declare that the real racism is to leave black children unprotected just so liberals can feel virtuous.”

As Trump put it, Bloomberg “apologized for everything he ever did, practically, and it’s pathetic.”

Bloomberg, 77, “also exposed a glass jaw after Trump teasingly said the 5-foot-8 ex-mayor needed a box to stand on for the next Democratic debate. Bloomberg’s indignant response was to call Trump a ‘pathological liar.’ ”

Devine noted: “It doesn’t say much for Democratic prospects that Bloomberg and his $2 billion war chest are ranking as high as third in national polls even before he officially joins the debate fray. Now that Joe Biden’s time on the Obama vapor trail is running out and socialist Bernie Sanders’ ascendancy is unchecked after a narrow, youth-fueled victory in New Hampshire, Bloomberg has become the hope of a party machine determined not to allow socialism on the ballot.”