Storm clouds are gathering along Mozambique’s northern coast.  Islamic State militants launched a coordinated and deadly assault on the town of Palma, nearby a multi-billion dollar natural gas complex being built by France’s Total energy.

The recent attack underscores escalating violence against civilians and foreign workers has triggered insecurity leading to considerable population flight from the region.

The script seems right out of the classic ISIS playbook with brutal ritualistic beheadings and burned villages adding to near theatrical intimidation. 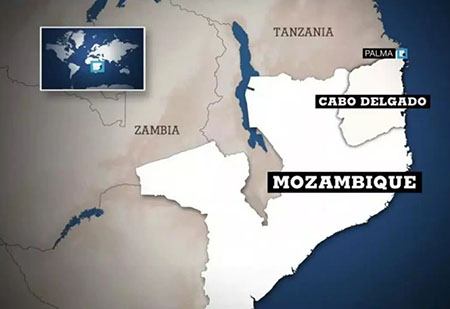 Among at least 55 people killed in Palma were local civilians, foreign contractors and government troops.  The three-pronged attack by hundreds of jihadi fighters underscored the expanding insurgency as well as the tactical capacity of the terrorists.

Yet the question remains whether this latest flareup in violence in southern Africa is really an extension of similar movements in places such as Nigeria or the sub-Saharan Sahel or more localized terrorism to destabilize the resource rich region?

The target is alluring; since 2011, rich LNG reserves have been discovered off the coast of Cabo Delgado. Major offshore gas fields would prove a financial windfall for the moribund Mozambican economy, hobbled by state socialism and rife with ingrained corruption.  Some analysts predict that the country could become a major LNG producer by mid-decade.

Currently Total has pulled back its staff from its $20 billion gas-port development after the attack. Total is reassessing its Mozambique operations until serious security can be assured. While the actual gas hub site at Afungi was not overrun by insurgents it was dangerously exposed to the attack.

The militant Islamic movement Ansar al-Sunna has been active throughout Cabo Delgado since 2017; one of the jihadi groups’s aims is to impose Sharia Islamic law on the region.

The widening insurgency has left more than 2,600 people killed and displaced nearly 700,000.

Experts expect these numbers to reach a million people before long.

According to the UN, prior to the Palma attack which displaced 10,000 civilians, nearly 670,000 people, including an estimated 160,000 women, were internally displaced in Cabo Delgado and Niassa. Furthermore, UN humanitarian sources state that more than 2.7 million people in Mozambique face food insecurity, at least 840,000 of them being in Cabo Delgado.

The southern African territory gained its independence from Portugal in 1975 after a decade-long insurgency in which the Beijing-backed Frelimo fighters seized power.

Though Mozambique’s government has dispatched thousands of troops to the North, the soldiers are poorly trained and motivated.  Given the high value target of Total’s gas terminal complex, a serious security capacity is needed.

Foreign players have already come into the mix to provide protection; the government contracted a South African firm Dyck Advisors which kept the recent attack on Palma from becoming a wider catastrophe.   Earlier Mozambique engaged with Russia’s state-sanctioned private security “Wagner Group” which has operated in places like Syria and Libya.  The Russians did not exactly distinguish themselves in counter-insurgency and have pulled back.

Now we quietly learn that a U.S. Special Forces Team has gone to Mozambique to train local units among the countries Marines.  The American deployment mirrors similar military training operations in places like Mali.

The U.S. has designated the Islamic State-linked insurgents in Cabo Delgado province a “foreign terrorist organization.”

In parallel Portugal, Mozambique’s former colonial power, will send 60 special forces to work in Cabo Delgado.  Ironically in the early 1970’s Portuguese Commandos battled Frelimo insurgents in precisely this region which was a key infiltration point from Tanzania.

Though the attacks have been growing in recent years there’s been a definite uptick in violence recently in Cabo Delgado a region forming the fault line between largely Christian Mozambique and the Muslim north bordering Tanzania.  Islamic State is clearly taking advantage of a power vacuum to insert itself in the far north of the country; militants are being recruited in Tanzania and sent into neighboring Mozambique.

While they call themselves Islamic State Central Africa Province; we may be deceived by the name and the branding.  The terrorists may be part of the Islamic State “franchise” but the jihadists plan to create a self-declared “caliphate” in Cabo Delgado province. This would have dire consequences for Mozambique as well as a potential spillover effect into Tanzania where there are shared ethnic and religious roots.

Beyond the fate of Total’s natural gas facility, there are serious security implications for all Southern Africa threatening destabilization of weak states.

Beheadings are back as ISIS attacks town near LNG site on Mozambique’s coast, WorldTribune.com