Back-to-normal talk ‘not allowed’ in U.S. as Austria, Denmark and Czech Republic re-open

Even as the coronavirus infections appear to be receding in some of the hardest hit areas, it is still “taboo” in many circles to even talk about returning back to normal in the United States, Fox News host Tucker Carlson said. 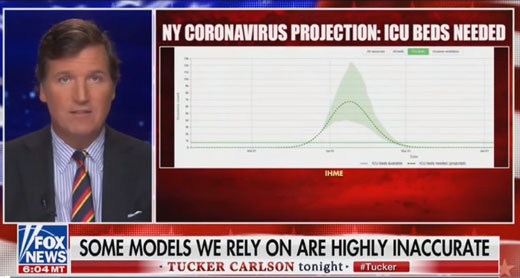 On Tuesday night’s broadcast of “Tucker Carlson Tonight,” Carlson pointed out how once-dire coronavirus projections “have been scaled back dramatically” in the wake of far lower numbers than any of the models anticipated, even taking social distancing measures into account.

“Whatever’s happening, this epidemic appears to be doing less damage than anticipated and it is receding more quickly,” Carlson said.

But while the news is something that “we ought to celebrate,” Carlson noted that serious discussions on getting things back to normal, as has happened in some places in Europe, haven’t even started.

“Now it’s time to look ahead,” Carlson said. “If the virus is doing less systemic damage to our system than expected, then presumably we can begin to consider how to improve the lives of the countless Americans who’ve been grievously hurt by this, by our response to this. How do we get 17 million of our most vulnerable citizens back to work? That’s the task.”

The Fox News host noted how other comparable countries like Denmark and Austria are already scheduling the re-opening of schools, day cares, and small stores.

“So that’s what they’re doing,” he said. “We’re not doing that here. We’re not even talking about doing it because we’re not allowed to. And any discussion of how we might transition out of the shutdown back into normal life for some reason has become taboo in this country. Go ahead and raise the question. You’ll find yourself denounced as a tool of Wall Street who doesn’t care about human life — often denounced by pro-choice activists who are happy to accept cash from corporate America.”

Carlson continued: “The layers of irony are of course bottomless. But we shouldn’t be surprised by it. This is what happens when public debate, healthy public debate, is replaced by memes, and mindless partisans on social media define the terms of allowable conversion, as they have. And so we plod forward, as if the flawed models weren’t flawed at all — as if the reality of what’s actually happening in our hospitals should play no role at all in the decisions we make going forward.”

Austria, Denmark and the Czech Republic announced plans to start cautiously easing the lockdowns next week.

“In Austria we reacted more quickly and more restrictively than in other countries so that’s why we now have the chance to come out of this crisis faster,” Austrian Chancellor Sebastian Kurz told journalists in Vienna. “But if necessary we can pull the emergency brake on all this at any time.”

As of Tuesday, 12,297 Austrians have been infected with the coronavirus and 220 have died.

“It’s an ambitious plan that will lead to a new normalcy,” said Kurz in announcing that all shops of up to 4,300 sq ft will be allowed to open from April 14. Malls and larger shops would be allowed to reopen at the start of May and then restaurants and hotels from mid-May, he said in announcing the measures on Monday.

In Denmark, which also moved quickly and forcefully to shut down its economy and public activity on March 11, Prime Minister Mette Frederiksen announced that the country would start tentatively reopening for business after Easter. Denmark was aggressive in quickly shutting its borders to foreigners in marked contrast to its southern neighbor Germany, which kept its European Union borders open long afterwards.

Denmark’s first step would be to reopen kindergartens and primary schools on April 15. That would be followed by government officials starting talks with business leaders on gradually allowing employees to return to their jobs. It will keep its borders closed, travel restrictions will remain in place and gatherings larger than 10 people are still banned.

In Prague, Czech government officials said they were considering relaxing some of the strict lockdowns imposed in conjunction with a state of emergency declared on March 12 when it banned travelers from many other EU countries. Health Minister Adam Vojtech said that a leveling off of the numbers of new cases was encouraging and if that continued more shops would be allowed to open Thursday as well as open-air sports activities – such as tennis.

“We are clearly saying now that we are able to manage the pandemic relatively well here – the pandemic is not managing us,” Vojtech said.

As of Tuesday, there were 4,882 confirmed coronavirus cases and 78 deaths in the Czech Republic