WASHINGTON ― The venom of opposing forces in the U.S. presidential campaign inspires comparison to the rhetoric of Kim Jong-un and his propaganda machine.

Insults, accusations, and lies are common currency of the opposing candidates. Having just watched the hyper speech-making that accompanied the nomination of Donald Trump at the Republican Party convention in Cleveland, I’m confident that Hillary Clinton and her acolytes will dream up equally mordant oratory at the Democratic convention in Philadelphia next week.

All that’s really missing from the blasts and counter blasts are physical threats to annihilate one another, as North Korean propagandists are in the habit of making. As if to compensate for that shortcoming, both candidates have a lot to say about war, terrorism, America’s “enemies” and all they’re going to do to wipe them out. Fear, war and violence are dominant images even if they talk in such generalities that it’s impossible to know what they would do in a crisis. 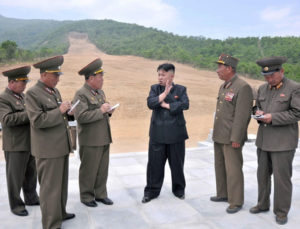 When it comes to big talk on foreign affairs, the “war on terror,” the threat posed by rampaging forces in the middle east, are basically all they seem to care about. While the U.S. military establishment is scaling down, you have to wonder whether the planners in the Pentagon are ready to risk a wider war in case tightly limited operations and drone strikes flare into a real bigger conflagration. That’s a question that Trump doesn’t begin to address while talking about cutting taxes but supporting the military.

The big talk rings all the more hollow when you consider the confrontation of forces in Asia. In fact, listening to all the claims and counter-claims, charges and counter-charges flung back and forth, you hear hardly a word about Asia.

Certainly neither Trump nor Clinton showed any interest in the stuff that sends tremors through Asian capitals. North Korea’s nuclear program, China’s claim to almost the entire South China Sea – these topics do not seem to be on anyone’s agenda. None of the 15,000 or so journalists accredited to cover the Republican convention wasted words speculating on why Trump seemed oblivious to anything happening across the Pacific.

Instead, Trump and his people are much more inclined to persist in pillorying Hillary for the attack that killed the American ambassador to Libya and three others in Benghazi nearly four years ago while she was secretary of state. They also blame her for everything else that’s gone wrong in the Middle East while offering no clue as to what they’d do instead.

Not that Hillary has anything substantive to say either. Rebuild U.S. troops in Afghanistan? Deploy more troops on mysterious special operations in northern Iraq or Syria? Who knows what she’s thinking?

When it comes to Asia, the candidates don’t even issue bold say-nothing promises about defeating Asian enemies. Kim Jong-un will have to order up another nuclear test if he hopes to get their attention.

The failure to talk about Asian issues is actually a little dangerous considering that the Pentagon has managed to sell South Korea on the need for THAAD missile batteries that could be the precursor to a real-life Star Wars. The meaning of THAAD, Terminal High Altitude Area Defense against missiles 100 miles above the earth’s surface suggests a new generation of warfare in the stratosphere. Hillary no doubt would go along with President Obama in endorsing THAAD, but does Donald Trump agree it’s a good idea?

Equally important, how do Trump and Clinton feel about the ruling by the International Court of Justice in the Hague that China’s claim to the South China Sea is invalid? Would Trump as president send vessels and warplanes into the vicinity of the Spratly Islands to challenge the Chinese claim? For that matter, has Trump even heard of the Spratlys or the court’s decision?

Hillary, on the basis of her experience as secretary of state, has a more sophisticated view about foreign policy than does Trump, but that’s no guarantee that she would act firmly in the South China Sea. Nor do we know how or if she would live up to all the assurances I heard her making during visits to Seoul as secretary of state of standing firmly by South Korea in the event of war with the North.

That’s one topic about which Trump has some thoughts: pull U.S. troops from South Korea and Japan too and leave them to fend for themselves. Like much else that he’s said, there’s no way of telling if he’d stick to that idea as president. What’s strangest about Trump-versus-Clinton big talk is that, after sifting through the verbiage, what they’re really thinking, how they’d really act in a crisis, is about as little known as it was before they began shouting insults at one another in their mad quest for power.

Donald Kirk has been covering war and peace in Asia for decades. He’s at kirkdon4343@gmail.com.