After five days of inspecting Marciopa County’s 2020 election ballots, Arizona Republican Chair Kelli Ward said “I believe we will find mistakes, we will find irregularities and we probably are going to find outright fraud.”

Ward also slammed Democrats who continue in their attempts to shut down the comprehensive audit which is scheduled to continue through May 14. 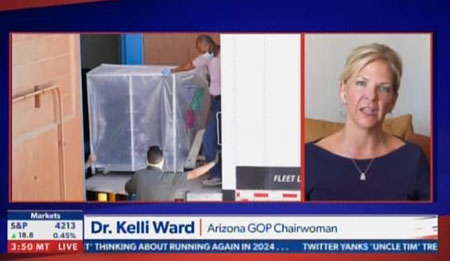 “The audit continues despite everything the Democrats and the Left throws at it,” Ward told Newsmax TV on Thursday.

“America’s audit continues,” Ward said. “We want election integrity. They call that voter suppression. I certainly want to suppress the dead votes. And I think many people out there want to as well unless they’re Democrats and they want to cheat in elections.”

Ward added: “I want our legislators to be equipped with objective knowledge to be able to make first-class election law for our state that can also be a model for the rest of the country.”

Ward was right about Democrats throwing everything they can at trying to stop or at least pause the audit of Maricopa County’s 2.1 million ballots. The audit also includes a review of 385 tabulators and other machines used last year.

Democrat groups The Brennan Center, Protect Democracy, and The Leadership Conference sent a letter to the civil rights division of the Department of Justice asking them to get involved in the Maricopa audit, The Hill reported on Thursday. The Democrat groups are asking the DOJ to send federal monitors to Arizona.

In a letter to the top official at the DOJ’s voting section, the Brennan Center, Protect Democracy, and Leadership Conference complained that the audit has put ballots “in danger of being stolen, defaced, or irretrievably damaged.”

Democrats assert that Cyber Ninjas and the three other firms the state Senate hired to carry out the audit aren’t properly trained and haven’t installed proper security procedures.

Lawyers for the Senate had told the judge that delaying the audit would result in slowing the state Legislature’s weighing of election reform bills, because the audit results will directly inform the legislation.

Arizona officials involved in the audit process have argued that ballots and machines are being secured by armed guards, and that voter privacy is being protected.

Meanwhile, Arizona’s former secretary of state said the audit is on pace to be done by next month’s deadline.

“The count is picking up significantly every day and with the additional shifts that we’re planning to put on, and other improvements in the process, we’re on a pace to get the job done in the time we have here at the coliseum,” former Arizona Secretary of State Ken Bennett, the state Senate’s liaison for the Maricopa County audit, told reporters.

The Senate has reserved Arizona Veterans Memorial Coliseum in Phoenix for the audit until May 14.

“We’re doing things that will get us to a number of ballots per day that will allow us to be done with the counting by May 14,” Bennett, a Republican, told reporters.

Republicans, including state Senate President Karen Fann, say the audit is meant to restore public confidence in elections, noting that polls suggest about one in two voters in the state aren’t confident in the 2020 result.