It is now clear that Hunter Biden’s laptop and the numerous allegations about his illicit dealings with foreign governments while his father, Joe Biden, was vice president are in fact genuine. Even though The New York Times has yet to inform its readers, numerous credible news reports, including mine, have documented that Hunter has been under federal investigation since at least 2018. 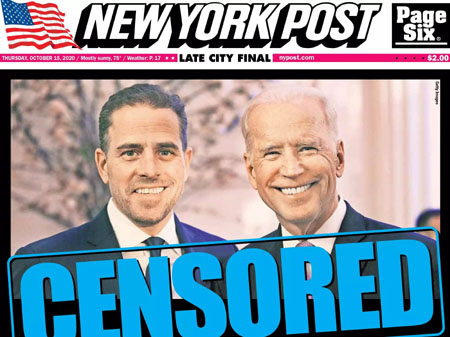 All the reports of Hunter’s laptop and other accusations against him being part of a Russian disinformation campaign have been shown to have been absolutely false, and in fact, part of a Democrat-led domestic disinformation effort to protect Joe Biden and affect the election.

Most significantly, over 50 former senior former U.S. intelligence officials played a disgraceful part in this partisan disinformation charade to deliberately misinform the American public prior to the 2020 election. This was coordinated election interference by high-ranking former intelligence officials.

There must be consequences.

This disinformation effort included an initial absolute big media blackout of the New York Post’s bombshell Hunter Biden laptop story, along with Big Tech censorship — going as far as blocking URLs linked to the story and removing posts, such as mine on LinkedIn, even remotely related to Hunter Biden’s links to China and Russia.

The most egregious aspect of this partisan domestic disinformation campaign though, was the recruitment of over 50 former senior U.S. intelligence officials, including five former CIA Directors, and former Director of National Intelligence (DNI) James Clapper, to discredit the Hunter Biden story.

They all signed a letter on Oct. 19 asserting, with ZERO evidence, that Hunter’s laptop, “has all the hallmarks of a Russian intelligence operation.”

The assertion was so sketchy, they added a disclaimer: “We want to emphasize that we do not know if the emails, provided to the New York Post by President Trump’s personal attorney, are genuine or not, and that we do not have evidence of Russian involvement.”

Still, even with the glaring disclaimer, this letter was then used by the Biden campaign to discredit the incriminating emails about Hunter Biden’s illicit business dealings with China, Ukraine, Russia, et al. And the media eagerly colluded with Team Biden to sell the purely concocted false narrative.

As Rich Lowry points out for the New York Post:

…Democrats and the media relentlessly hewed to the Russian disinformation line. Of course, House Judiciary Committee Chairman Adam Schiff spouted it: “We know that this whole smear on Joe Biden comes from the Kremlin.” Biden used it to deflect during a debate with Trump: “There are 50 former national-intelligence folks who said that what he’s accusing me of is a Russian plan[t].”

This Russia nonsense has all now proven to have been a huge lie, and over 50 former senior U.S. intelligence officials willingly conspired to spread that lie to affect the outcome of a U.S. presidential election.

Unlike the Russia collusion hoax, this collusion and election interference by former U.S. intelligence officials is crystal clear. There must be consequences.

Paul Crespo is the Managing Editor of American Defense News. He served as a Marine Corps officer and as a military attaché with the Defense Intelligence Agency (DIA) at U.S. embassies worldwide. Paul holds degrees from Georgetown, London, and Cambridge Universities. He is also CEO of SPECTRE Global Risk, a security advisory firm, and president of the Center for American Defense Studies, a national security think tank.

Report: Still no chain of custody for hundreds of thousands of Georgia ballots
Read more