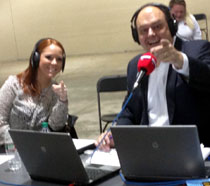 Don’t let the military jet fly-over fool you this Super Bowl. The NFL is just as anti-military as they were before.

The NFL rejected a veterans group, AMVET’s, Super Bowl ad because it asks people to stand for the anthem. The two words that frighten the NFL and Roger Goodell to the core is: “please stand.”

There is only one word to describe this: Censorship.

The NFL invited AMVET’s to advertise during the Super Bowl. But was quickly rejected once the ad stated #PleaseStand. The reason? They didn’t accept the ad because they consider it a “political statement.”

NFL Vice President of Communications Brian McCarthy said, “The Super Bowl program is designed for fans to commemorate and celebrate the game, players, teams, and the Super Bowl. It has never been a place for advertising that could be considered by some as a political statement.”

However, this didn’t stop the NFL from running Budweiser’s “Born The Hard Way” commercial last Super Bowl. The commercial showed the story of its co-founder Adolphus Busch’s journey to America. In the ad, Americans are seen yelling “you’re not welcome here,” and “go back home.” Many believed this commercial was making a political statement against Donald Trump and his stance on immigration.

That was then. This is now. AMVET’s wrote a letter to NFL CEO Roger Goodell after the rejection. National Commander, Marion Polk, wrote, “Freedom of speech works both ways. We respect the right of those who choose to protest, as these rights are precisely what our members have fought — and many cases died — for.” He continues, “but imposing corporate censorship to deny the same right to those veterans who have secured for us all is reprehensible and totally beyond the pale.”

So, let’s get this straight. What is acceptable to the NFL? They have no issue with a litany of unsavory characters like, Colin Kaepernick, Ray Rice, Adrian Peterson, and Ben Roethlisberger. But letting our veterans run an ad simply asking to please stand during the national anthem is wrong. What about when the Dallas Cowboys wanted to place decals on their helmets to pay tribute to the Dallas police department? That was also rejected.

The NFL’s viewership and game day attendance has plummeted since the beginning of players’ national anthem protests. The players didn’t see any consequences for kneeling or disrespecting the American flag and military members. The NFL doesn’t care about patriotism. It’s all smoke and mirrors. It’s time to stand up to these anti-American players. Other organizations like the NHL and NBA have said they’ll run AMVET’s #PleaseStand ads. We should support them.

The NFL, however, is another story. The league cynically uses veterans as props to sell NFL clothing and show military flyovers. But when it comes to respecting and honoring their rights to free speech—rights that countless vets have given their lives for—the NFL is MIA. The sad truth is they don’t care about our military.

The Patriots might be in the Super Bowl again this year. But the boycott must continue.

Brittany Jennings is the Executive Producer of The Kuhner Report on WRKO.