Kennedy also made the case that Fauci conspired with U.S. government intelligence agencies, most prominently the CIA, to script the entire reaction to the virus before the outbreak reached U.S. shores. 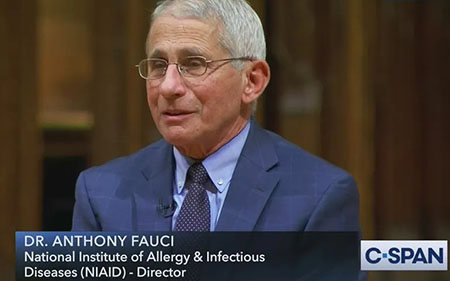 “One of the things I think I show that will surprise people is the deep involvement of intelligence agencies,” Kennedy said in an interview with Brannon Howse Live. “Not only in the gain of function funding in Wuhan and the very odd partnerships they had with the Chinese military scientists, but also how it was the intelligence community, particularly the CIA, that conspired with Tony Fauci to use the pandemic as a pretense to impose totalitarian controls, to obliterate the Bill of Rights, not only in the United States but in democracies across the world.”

“All of the policies of Fauci were designed to facilitate the public view that the vaccines were the only way out of the pandemic and then came the use of orchestrated fear as propaganda. To get people to be locked in under house arrest and induce a condition that is known as Stockholm syndrome, which makes people grateful to their captors and believing in them that the only way to survive, the only way out of the crisis, is total obedience to the commands of the captor,” Kennedy said.

Kennedy noted that Fauci’s NIAID, a sub agency of the NIH, has an annual budget of $6.6 billion “and virtually all of it goes to drug development.”

“He farms it out to universities, they become allies, and he partners with them and the pharmaceutical companies in developing new drugs and uses his power to usher those through the regulatory process and get FDA approval. So he controls all of the relevant agencies at the U.S. Department of Health and Human Services, not just NIAID, but NIH, and CDC to some extent, and the FDA almost completely,” Kennedy said.

Kennedy pointed to a loophole in the bioweapons treaty which allows the funding of biomedical research which can claim a dual use, such as the development of vaccines that could be used as a defense against a bioweapon.

“But the Pentagon didn’t want to get into that business because they felt they would be exposed. So they started funneling money through NIH and that money ended up with Tony Fauci,” Kennedy said.

In addition to the $6.1 billion Fauci gets from U.S. taxpayers every year for this research, he gets another $1.6 billion from the military to do bioweapons research, which they called “dual use” research, Kennedy noted.

At some point the terminology for bioweapons research changed from “dual use” to “gain of function.”

Fauci received a 68 percent raise in his salary in 2002, and the pay hike was tied directly to his continued bioweapons research, Kennedy said. Today Joe Biden’s Covid czar is paid an annual salary of $434,000, the highest of anybody in the U.S. government, including the president, who gets paid $400,000 a year.

Kennedy pointed to a key moment in the year 2000 when Bill Gates called Fauci to his mansion outside of Seattle.

“They shook hands in the living room of his $87 million mansion, and they shook hands for a partnership to vaccinate the whole world by the year 2020,” Kennedy said. “And they worked with the intelligence agencies and the Pentagon to make that happen.”

In 1972, President Richard Nixon signed a bioweapons security treaty which made it illegal to do any kind of experimentation or storing of biological weapons.

“But the CIA continued to do it illegally, funding it through USAID,” Kennedy said.