A U.S. Catholic nun who the progressive Left portrays as an apolitical angel of mercy to the “suffering migrants” pouring over America’s broken southern border is in fact a deeply committed social radical. 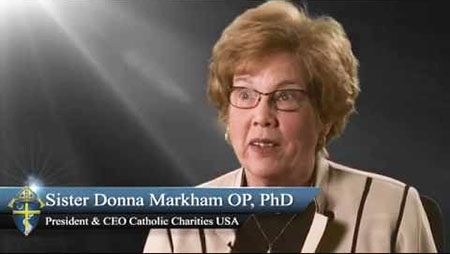 Donna Markham has even used her elitist ties help thwart Catholic bishops’ attempts to prevent abortion from being covered by Obamacare health plans.

The ruling elite-allied Jesuit Order furiously weaved its Mother Teresa of the Undocumented narrative on Feb. 16 on its flagship publication website America:

The angry emails and phone calls have been pouring in this week, and Donna Markham, O.P., the president and C.E.O. of Catholic Charities USA, has been among C.C.U.S.A. staff shocked by all the vitriol.

“We certainly have received hateful, hateful calls from people who say they are Catholics,” Sister Markham said, “and speaking to us in language that I would never repeat and threatening our agencies. It’s a very sad situation.”

The unpleasantness followed quickly in the wake of press releases and news reports about a Freedom of Information Act lawsuit filed by the political action groups Judicial Watch and CatholicVote. The suit demands records of communication between the U.S. Departments of Homeland Security and of Health and Human Services “with Catholic organizations near the Texas border that were aiding illegal immigrants.”

The most prominent culturally leftist subversive priest in the U.S. today, Jesuit Father James Martin, was quick to voice his outrage:

The attack on Catholic Charities–Catholic Charities!–by supposedly Catholic groups is both insane and immoral. Next, they'll be attacking Jesus for helping the "undeserving poor." @CCharitiesUSA is one of the US church's brightest lights.

Poor Sister Markham just can’t understand why some hate-filled people are dragging politics into her efforts to help illegal aliens make their way into the United States:

“I’m mystified by any group that would call itself Catholic that is attacking the Catholic Church and its ministry,” Sister Markham said. “Our work with those who are poor takes its impetus, really, from our Catholic faith, and the Gospel mandate that calls all of us for over 2,000 years, especially as Catholics, to care for those who are vulnerable, homeless, hungry and suffering.

“It’s Matthew 25,” Sister Markham added. “And Catholic Charities in particular has been doing this since 1910. This is really our identity, and we don’t have any intention of stopping this ministry.

“Our work is humanitarian,” she added. “It is not political. It is grounded in our faith.”

That’s twice in three paragraphs that Sister Markham has questioned the Catholic standing of anyone who would dare call her out on her destructive work.

But this nun is far from the quiet little servant tilling the fields of the Lord that she pretends to be. Sister Markham is a former Georgetown University executive and a member of the Adrian Dominican Sisters, an order of women religious with a decades-long reputation for avowed leftist radicalism.

The Catholic Cardinal Newman Society in 2015 wrote a tidy expose of Markham as she was named the new president of Catholic Charities:

In 2003 and 2004, Sister Donna Markham, O.P., was Georgetown University’s director for leadership initiatives and special assistant to President John DeGioia.  It was in October 2003 that Georgetown’s Women’s Leadership Initiative sponsored a first-ever Meeting of the Ministers of Women’s Affairs from countries around the world to discuss women’s issues.

Sr. Markham left Georgetown to serve as prioress of the Adrian Dominicans, a post she held from 2004 to 2010.  During her tenure, the reputation of the congregation for progressive activism was not diminished.  As key participants in the Interfaith Center on Corporate Responsibility, Adrian Dominicans have been leaders in the “shareholder movement” to force public companies to disclose political donations and other transactions.

They also have been leaders in environmental activism; it was while Sr. Markham was prioress, in 2008, that Adrian Sister Patricia Siemen, O.P., founded the Earth Law Institute.

The Cardinal Newsman Society outlined the duplicitous manner in which the Adrian Sisters played a crucial role in scuttling Catholic opposition to Obamacare due to its inclusion of abortion in the taxpayer-funded health plans:

While Sr. Markham was prioress, the Adrian Dominicans joined the Catholic Health Association in undermining the U.S. bishops’ efforts to ensure that abortion would not be covered under health plans associated with Obamacare. They joined an effort to lobby Congress to approve the measure, despite the bishops’ opposition.

“Despite false claims to the contrary, the Senate bill will not provide taxpayer funding for elective abortions,” wrote Sister Kathleen Nolan on behalf of the Adrian Dominicans’ General Council, together with other women religious, in a March 2010 letter to Congress. “It will uphold long-standing conscience protections and it will make historic new investments — $250 million — in support of pregnant women.”

Adding insult to the bishops, the sisters declared that theirs “is the real pro-life stance.” Subsequently, their claims have been proven false by revelations of abortion coverage in Obamacare-funded plans.

The letter was released via a hardline partisan organization called Network Lobby for Catholic Social Justice.

Here’s how the leftist establishment National Catholic Reporter described things at the time:

National Catholic organizations that are plainly pro-life but broke with the rigid position of the U.S. bishops on their interpretation of the abortion language in the final legislation were credited with providing the leverage some pro-life members of Congress needed to vote in favor of the bill. These included the Catholic Health Association, the Leadership Conference of Women Religious [LCWR], Network (a Catholic social justice lobby), Catholics United, and Catholics in Alliance for the Common Good.

Sr. Markham herself was president of the LCWR in 1991, the same year that Donna Steichen published Ungodly Rage, a devastating exposé of problems in the LCWR and its member congregations.

When Obama signed the bill into law, during the signing ceremony “he told me it [the new law’s passage] was because of us,” Campbell said.

Network went on to enjoy a brief moment of fame with its “Nuns on the Bus” advocacy for Obama during his 2012 re-election campaign.

Author Steichen illustrated the fanatical activist nature of the wild-eyed radical feminist nuns involved in LCWR in an informative April 2012 interview with LifeSiteNews.

“Last week the media and the ‘progressive’ end of the Catholic Church reacted with outrage to the announcement by the Vatican’s Congregation for the Doctrine of the Faith that the Leadership Conference of Women Religious (LCWR) is to be reformed after a doctrinal investigation found that their focus had turned more towards radical feminist politics than their Catholic religious foundations,” LifeSiteNews reported.

Steichen observed that too many Catholics simply refuse to believe that American nuns could have become so insanely radical.

“The misunderstanding arises from failure to define the term ‘feminism,’” Steichen said. “Feminists themselves avoid clearly defining it, so the general public accepts the rosy impression cultivated by advocates in media and academia; that the term simply means recognition that women are full and equal members of the human race who can do anything men can do.”

But this is a bit of public relations sleight of hand, she said. “Feminism is an ideology, and it is designed to destroy the family as the basic unit of society.” That ideology, she said, encompasses an entire universal outlook that, once adopted by an individual, ultimately totally eclipses any religious notions about the nature of human life, sexuality, family, the purpose of the state and finally, the nature of God.

In other words, these people are fierce ideologues in the nature of the most fervid adherents of Soviet or Maoist China communism. They are true believers in a new religion:

Steichen suggests that those who are outraged at the Vatican examine some of the speeches made by speakers at LCWR’s annual conferences, many of which are available on their website. These speakers were specifically cited in the [Congregation for the Doctrine of the Faith’s] document as problematic. One, Sr. Laurie Brink, was particularly noted as flagrantly denying the Divinity of Christ when she gave the LCWR keynote address in 2007, telling the sisters that to maintain their “prophetic” place in society they needed to “go beyond” the Church and even “go beyond Jesus.”

New Age mysticism was also apparently a part of LCWR spirituality at the time:

Set to offer the keynote address at this year’s [2012] assembly in August is Barbara Marx Hubbard, a New Age guru, who is scheduled to speak on the theme, “Mystery Unfolding: Leading in the Evolutionary Now.”

LCWR confirmed that Hubbard did indeed address the assembly in its October 2012 newsletter:

Barbara Marx Hubbard, a futurist and author, spoke on consciousness evolution where she noted that the very crises humanity is facing on a global scale require the exercise of a higher level of ethical, shared commitment and social synergy to realize positive change.

Hubbard wrote a thank-you note to LCWR that was published in the newsletter and invited all LCWR members to join her for a special event:

… a planetary celebration called Birth 2012 on December 22, 2012, initiated by me with The Shift Network and many others across the planet….

On that day, and before, people are invited to form “hubs” of all kinds to deepen their own sense of community, communion, and co-creativity among friends, neighbors, and colleagues, symbolically giving “their gift to the planetary shift.”

I hope all of you will have a unique celebration of Birth 2012 for the planetary shift on December 22, 2012 and become active participants in a new global movement for the conscious evolution of our planet – our shared mission for the 21st century.

The Birth of Christ on December 25 apparently takes a backseat to the planetary shift on Dec. 22 in this spectacularly warped radical feminist nun world.

The October newsletter also mentioned Markham’s leadership role at this same 2012 gathering, stating that she helped lead “four press briefings that provided the media background on religious life, LCWR, and the practices of contemplation and dialogue.”

Hello from Tampa, where I have spent the last couple of days with leaders in @CCharitiesUSA's O'Grady Leadership Institute. It was great spending time with their great President & CEO, Sr. Donna Markham, as well as the many leaders they assembled. pic.twitter.com/fl2Ee9VHzv

Make of that what you will.

The fact that Markham is attempting to hide behind the deep respect most Americans still naturally want to accord to nuns as she actively sustains the illegal alien invasion of this nation, with all the grave harm it is causing to the citizens of this nation, makes her actions all the more despicable.