Yes, he actually said this: 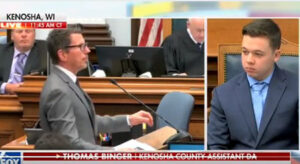 During closing arguments in the Kyle Rittenhouse case on Monday, Assistant District Attorney Thomas Binger said: “You lose the right to self-defense when you’re the one who brought the gun.”

Before closing arguments began, Judge Bruce Schroeder dismissed one count of illegal possession of a dangerous weapon by a person under 18. The misdemeanor, punishable by up to nine months in jail, was considered one of the stronger counts against Rittenhouse.

Binger: “You lose the right to self-defense when you’re the one who brought the gun.” pic.twitter.com/2pu7lehnBx