He is no longer president, but Barack Obama, the Great Divider who vowed to “fundamentally transform” America in 2009, is carrying on his commitment to radical social change through his Obama Foundation. 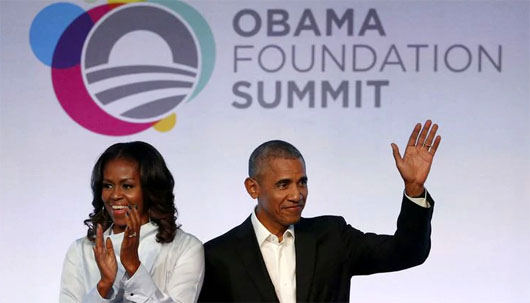 The president who never tired of lecturing America on the supposed sins of its past and mainstreamed the use by progressives of cultural Marxist buzzwords like “tolerance” and inclusion” as a battering ram to overthrow what they viewed as an “oppressive” U.S. society is still promoting his hostile agenda through his nonprofit organization. He has ample amount of corporate support as he does so.

At an address to the Obama Foundation Summit in Sept. 2018, Obama insisted that America is not progressing as a nation “because we are still confused, blind, shrouded with hate, anger, racism, mommy issues.”

“You should be extraordinarily impatient about the injustices and nonsense and foolishness you see around you and you should be finding opportunities at every juncture to challenge those things,” he told his audience. “At the same time, you have to keep in your mind: Societies are these complex, organic things that you don’t turn [like] switches. They evolve. They shift. They change.”

Yes, the old community organizer remains devoted to societal change. His foundation fully reflects this commitment to “shifting” and “changing” U.S. and Western society at its core.

The Obama Foundation Fellowship is a two-year grant program meant to help advocates for change by offering financial and other resources in order to “amplify the impact of [recipients’] work and inspire a wave of civic innovation.”

Several of the “Obama Fellows” work with the Third World refugees and illegal immigrants currently besieging the West. Veronica Crespin-Palmer is co-founder and CEO of RISE Colorado. The group helped implement “the first community-led resolution to be passed in the United States that supports students regardless of documentation status,” the website Teach For America states. “This victory means undocumented students in the Aurora district are more likely to attend school and feel safe.”

Another Obama Fellow, Alice Barbe, is co-founder of the French organization SINGA. A tweet on Obama’s official personal Twitter account crowed that Barbe is “helping refugees resettle into welcoming communities in France, offering them job training and language immersion, as well as a place to stay. More importantly, she’s fighting a narrative that suggests our differences are more important than our shared humanity.”

“Migration is an opportunity, not a crisis, and your support is priceless!” a grateful Barbe responded in her tweeted reply to Obama.

Yet another Obama Fellow, Zarlasht Halaimzai, is founder of the Refugee Trauma Initiative. The Obama Foundation featured her in a special “World Refugee Day” posting on its website. “I hope that the Fellowship gives me and RTI a platform where we can talk about refugee rights and talk about the kind of care that’s necessary for refugees to start a new life,” she says in a Q&A on the impact she hoped the foundation grant would have on her work.

Radical progressive billionaire George Soros is also having a huge impact on her work. In February RTI announced the formation of a special initiative “which has been made possible with the support of [Soros’s] Open Society Foundations.” The project will “offer NGOs in Greece comprehensive programmes of capacity building, technical support, operational guidance and a grant of up to €25000 over a twelve-month period” as they work to bring and settle refugees into Greece.

The Open Society Foundations is heavily invested in supporting NGOs in their efforts to flood Greece with a staggering amount of refugees. On its website, Soros’s operation enthuses that, “[i]n 2015, we supported local groups in Greece, as they responded to the arrival of over 800,000 refugees fleeing conflict and poverty in the Middle East and Africa.”

On the foundation’s “Contributor” page one can find numerous well-known companies. Under the tony $1,000,000+ section, AT&T, Boeing, Fidelity Charitable, the Goldman Sachs Philanthropy Fund and Microsoft are listed.

AT&T’s Obama ties are even more extensive than the seven-figure check it cut to the foundation.

Private equity investor Glenn Hutchins is a member of the Board of Directors for both the Obama Foundation and AT&T. Hutchins is a longtime supporter of the Clintons, and also sits on the Hillary Clinton-aligned Center For American Progress’s board as well. The Center is heavily funded by Soros’s Open Society Foundations. See how all the money mingles together?

Hutchins was exposed for the partisan hack he is during the Wikileaks John Podesta email dump in 2016.

In a Nov. 2015 series of email exchanges found in the Podesta files, Hutchins tells the powerful Clinton operative that he will be appearing on CNBC as presidential candidate Donald Trump calls in to the network. Hoping he might get the chance to ask Trump a question, Hutchins implores Podesta for help in crafting a query that can damage the Trump campaign.

Another curious donor under the $1,000,000+ listing is the Silicon Valley Community Foundation, which is part of the Silicon Valley Leadership Fund. We reported on this organization in our March expose on the phony outrage expressed by leftist corporate advertisers canceling their commercials on Tucker Carlson’s Fox News show.

Western Digital CEO Steve Milligan sits on the board of directors for SVLG, which takes a staunch pro-immigration stance. Milligan was among the signers of a public letter to President Trump from the SVLG denouncing the “separation of families” of illegal aliens at the southern U.S. border.

Marie Oh Huber sits on the board for the Silicon Valley Community Group, which directly donated that $1 mil-plus to the Obama Foundation. A senior vice president and general counsel for eBay, Huber is also on the board of directors for Portland General Electric.

Huber served earlier this year as a Benefit Committee Co-Chair for the Asian American Legal Defense and Education Fund as it hosted its “2019 Justice in Action Awards.” Vanita Gupta, head of The Leadership Conference on Civil & Human Rights, was honored as one of the award recipients. Gupta is a former head of the Justice Department’s Civil Rights Division under the Obama administration. A committed immigration radical, Gupta’s Leadership Conference tirelessly bashes Trump administration efforts to secure our border and ceaselessly champions massive immigration into the U.S.

“When the right-wing scapegoats immigrants and refugees to advance a white nationalist agenda, our coalition rises above the politics of fear and division,” the group’s website states. “We will continue to protect our most vulnerable communities and demand a home for everyone here in our nation — a nation founded by refugees, immigrants, and those seeking religious freedom.”

Gupta is listed as a “Current Fellow” of the “New Executives Fund” for Soros’s Open Society Foundations.

It should be no surprise that Gupta is being honored by AALDEF. For it too is a fervent supporter of illegal immigrants. The group’s 2016 annual report, the most recent to be found on its website, lists NEO Philanthropy as a “major donor.” As we detailed last week, NEO Philanthropy is a “fiscal clearinghouse for left-of-center causes” that has reportedly received $12,522,100 in funding since 2001 from two Soros outlets, the Open Society Institute and the Foundation to Promote Open Society.

As Obama said in his address to his Foundation, societies are “complex.” In order to radically transform them, an extensive organized network is needed. The Obama Foundation is committed to being a part of such a network. George Soros and several well-known major corporations and corporate executives are eager to help fund it.