An intoxicating establishment myth has risen from Russian President Vladimir Putin’s invasion of Ukraine: that of the stone-faced liberal and sophisticated freedom fighter for “democracy” and the “rules-based international order,” otherwise known as the culturally libertine modern West:

Speaking of woke skies and non-binary fuss, the Ukrainian LGBTQ community is defending their homeland in combat and as medics, because Russian anti-LGBTQ policies (shared by GOP) would spell death. https://t.co/lB29KZMKwP

With the tragedy and destruction unfolding so distressingly in Ukraine, we should remember the values and hard won freedoms that distinguish us from Putin, none more than LGBT+ rights. So let’s resume our series of tweets to mark #LGBTHM2022

But reality has a way of intruding. Whereas progressives would love to indulge in happy thoughts of masses of woke urbanites slamming down their Starbucks’ cups, tossing away their scones and marching on Russian tanks approaching Zaporizhzhia, the truth of the matter is that it is a certain type of person that is attracted to war, and that type is everything the domesticated cosmopolitan Westerner of today fears and despises.

A 2019 article at Vice News ably captures the dominant establishment panic over the warrior tempted to fight for Ukraine:

[Swede] Mikael Skillt is just one of many far-right extremists, estimated to number between the hundreds and the low thousands, who have flocked to eastern Ukraine to take up arms since fighting erupted in 2014. Hailing from across Europe, North and South America, and as far away as Australia, they’re drawn by the opportunity to fight alongside other right-wing radicals on either side of the conflict. Many see the battle as a crucial training ground for the defense of white Europe, where they can forge deep international links and gain combat experience they believe will be critical at home.

When they return home, they’re battle-hardened and more radicalized than ever, researchers say, and often fly below the radar of security services more focused on the returning jihadi threat. 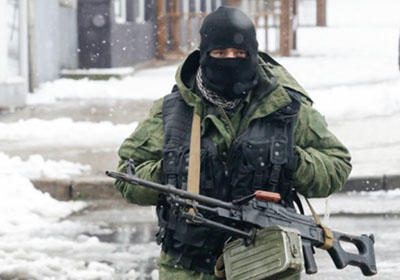 As a certified Woke nation, Australia has been outspoken in its support for Ukraine and condemnation of Putin. But deep-seated institutional notions of the threat posed by white men with guns has led it to discourage its citizens from joining the international crusade for neoliberalism.

Political leaders and terror experts warn that Australians with radical views could be drawn to take part in the conflict in Ukraine, potentially posing a security risk if they return home.

The Department of Home Affairs and spy agency ASIO have both said they monitor those traveling to join the conflict in the region, which has already drawn thousands of foreign fighters — including a small number of Australians — since 2014.

It is feared Russia’s invasion could spark renewed global interest in joining the fight and Australian laws may not prevent extremists from traveling to take part and then returning home.

The network fully notes that Ukraine has called on the people of the world to reinforce its front-line ranks:

Ukrainian president Volodymyr Zelenskyy has called on “all citizens of the world” to join Ukraine’s defense.

But Australia’s credentialed class is uncomfortable with who is most likely to answer the call Down Under:

International relations lecturer Sara Meger has interviewed dozens of combatants in Ukraine, including about 15 foreign fighters….

One common factor across the battlelines is that many of the foreign fighters have served in their home military, with some having fought in Afghanistan and Iraq….

“It’s not just the David and Goliath story of defending Ukraine, but seeing this as the front line of a global war,” she told RN Breakfast.

As part of her research, she asked foreign fighters whom they saw as their enemy.

“One person’s response was communists, homosexuals and pedophiles,” she said.

Other responses were just as disturbing to the esteemed lecturer:

“One guy I spoke with, he was a bit of a war adventurer. It wasn’t so much Ukraine he was interested in,” she said.

“But when he said he was tossing up between going either to Syria to fight against ISIS or Ukraine, it was the whiteness of Ukrainians that led him there.”

Egads! Didn’t anyone mention that they wanted to fight to preserve unlimited sexual freedom and transgender children’s books?

Vice quoted another expertist, who clanged the bell loudly for the white supremacist threat:

“We’re very concerned,” said Mollie Saltskog, an intelligence analyst at strategic consultancy firm The Soufan Group, who has tracked the mobilization of far-right foreign fighters. “You have individuals who are battle-hardened, probably more radicalized than before they left. You have a global network of violent white supremacists now who can easily keep in touch on different platforms and go back home, spread that propaganda, conduct training — or move on to the next fight.”

ABC reports that the Australian government is officially troubled.

“The Australian government is alert to the potential for Australians to travel to Ukraine to engage in hostilities and will continue to monitor and assess movements of individuals from Australia and apply policy and operational mitigations where necessary,” [a spokesperson for the Department of Home Affairs said].

Ruling establishment newspaper of record The New York Times is torn by its twin illusions as well.

Here is Times’ national political correspondent Trip Gabriel echoing daydreams of a modern-day Abraham Lincoln Brigade, that beloved historical trope that had overeducated yet still mucho macho American intellectuals trekking off to Spain in the 1930s to fight for a murderous hardline leftist government that was backed by Soviet dictator Josef Stalin:

Ukraine Minister of Foreign Affairs calls for a latter-day International Brigades to once again fight fascism (Americans in the 30s went to Spain as the Lincoln Brigade). https://t.co/f5BwWKoHxB

No word yet on how many NYT staffers have signed up to defend Kyiv to the last bullet.

And here is The Times on Feb. 25 repeating the white supremacist threat trope regarding foreign soldiers in Ukraine:

“Instability in Ukraine offers white supremacy extremists the same training opportunities that instability in Afghanistan, Iraq, and Syria has offered jihadist militants for years,” said Ali Soufan, who heads The Soufan Group, which has been documenting for several years how the conflict in eastern Ukraine has emerged as an international hub of white supremacy.

Yes, The Soufan Group appears to be a go-to expertist source for big-box media organizations around the world these days.

But nowhere do these comfortable establishment outlets confront the elephant in the room. It may not be right, but human nature has repeatedly shown throughout history that men of action are attracted to war for war’s sake. As Mikael Skillt told Vice:

“This brotherhood which comes when you share life and death, it’s a poison. I’ve never been a drug user, but I can imagine the feeling is pretty much the same.”

No one talks this way about the opportunity to shed their blood in defense of the use of preferred gender pronouns and the sacred right to promiscuous sex.