CAIRO — Heavy fighting has been reported along the border of Sudan
and its new independent southern neighbor.

The fighting has taken place along the disputed border in which up to
150 Sudanese Army soldiers were reported killed. The rebels reported the
capture of a Sudanese Army outpost in South Kordofan. 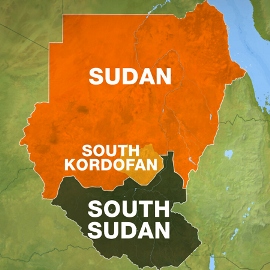 “The situation could explode into full-scale war,” a Western diplomat
said.

The rebel Revolutionary Front has claimed responsibility for an attack
on the Sudanese Army outpost at Lake Obyad just across from the new country of South Sudan. The rebels, who denied any help from South Sudan, said the attack took place on Feb. 26.

The Sudanese military has acknowledged the fighting, but said many of
the rebels were killed. The Khartoum regime has blamed the Western-supported government in South Sudan for the attack.

Tensions have risen over the last three months in wake of the formal
secession by South Sudan in July 2011. Juba has accused Khartoum of ordering air strikes on communities in South Sudan as well as stealing crude oil.