CAIRO — Morocco has been quietly building a wall around the Spanish enclave along the Mediterranean Sea. 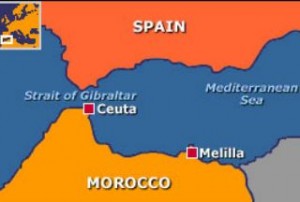 Moroccan sources said the North African kingdom was constructing a wall to stop infiltration of the Spanish enclave of Melilla.

The sources said the five-meter wall was topped by blades and barbed wire to prevent scaling by African migrants.

Human rights activists said construction of the barrier began around April 20 after African migrants overcame the current triple-layer fence built by Spain. In March, about 500 migrants managed to scale the fence in an attempt to infiltrate to Europe.

Morocco has not provided details of the barrier. Both Spain and the European Union have urged Rabat to enhance border security to stop African migrants.

Neighboring Libya also plans to build a border wall. Libyan sources said
the army was examining a plan to establish an earth barrier to stop
smuggling to and from Egypt.