The U.S. Postal Service is covertly tracking what it alleges are “inflammatory” social media posts made by Americans. 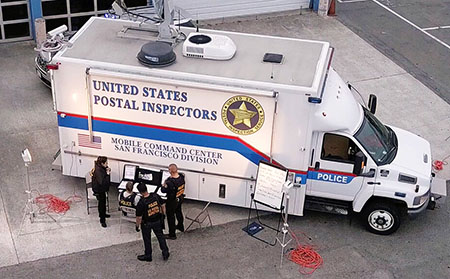 The Internet Covert Operations Program (iCOP) is run by the U.S. Postal Inspection Service (USPIS), the law enforcement arm of the U.S. Postal Service and “has been quietly running a program that tracks and collects Americans’ social media posts, including those about planned protests,” Yahoo News reported on April 21.

Documents obtained by Yahoo News detail a covert program which deploys analysts to trawl through social media sites for information that is then shared across government agencies.

Kentucky Republican Rep. Thomas Massie noted: “The USPS has been losing money for many years … so where do they find money to run this surveillance program?”

The USPS in August last year reported losing $2.2 billion in the three months that ended in June.

Critics wondered why the USPS would even be involved in such a program, adding the “bizarre” operation seems more like something out of George Orwell’s “1984.”

Rachel Levinson-Waldman, deputy director of the Brennan Center for Justice, questioned the legitimacy of the program: “If the individuals they’re monitoring are carrying out or planning criminal activity, that should be the purview of the FBI. If they’re simply engaging in lawfully protected speech, even if it’s odious or objectionable, then monitoring them on that basis raises serious constitutional concerns.”

The iCOP program has not previously been made public, Yahoo News added. The report did not state when the surveillance began.

In response to a query from Yahoo News, the Postal Service stated:

The information regarding the demonstrations against Covid lockdown measures was distributed through Department of Homeland Security facilities. The agency collected information from Facebook, as well as Parler and Telegram.

“Icop analysts are currently monitoring these social media channels for any potential threats stemming from the scheduled protests and will disseminate intelligence updates as needed,” reads a Postal Service bulletin obtained by Yahoo News.

An alleged member of the Proud Boys is named in one bulletin, along with others who did not appear to have posted anything threatening.

Social media users have expressed concern over the secretive program. One user said: “You’ve got mail! Seriously, USPS is monitoring our social media?”