Maybe they should have called the category “Famous Liars,” one obviously biased observer commented. 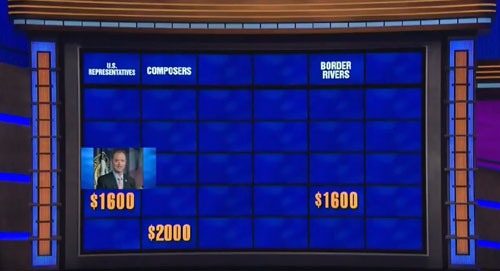 Adam Schiff was an answer on Wednesday night’s “Jeopardy!” — and none of the three contestants knew who he was.

The category was “U.S. Representatives” and, under the $1,200 clue, host Alex Trebek showed Schiff’s photo and gave the clue — “1/53rd of California’s House delegation is this Intelligence Committee chairman.” The time expired before any of the three contestants were able to identify Schiff.

Some in the Twitterverse said the contestants on the popular game show were merely a reflection of how Americans have largely tuned out the Democrats’ impeachment spectacle.

An article by Insider notes that “Jeopardy!” typically films its episodes approximately three months in advance. That places the timeline of Wednesday night’s episode around October, when the House was still holding closed-door briefings.

But, even before the impeachment hearings chaired by Schiff went live, and before President Donald Trump dubbed him “little pencil neck,” Schiff had been an outspoken critic of Trump and a frequent guest on corporate media shows.

Yet none of the contestants could name Schiff. And it was not like this was a particularly clueless batch of contestants. The contestant who called for the Schiff clue had already amassed $13,400.

The Daily Caller noted that former Stormy Daniels attorney Michael Avenatti “suffered a similar fate when he was an answer on the same game show last November — and none of the contestants were able to name him either.”

After countless TV interviews, Sunday show appearances, and leading the impeachment inquiry on cable news networks for hours upon hours, nobody knew who Adam Schiff was on Jeopardy tonight.