In a meeting broadcast live on GA Government TV, the residents presented what they said was evidence showing direct financial underwriting of the staffing service Happy Faces Personnel Group by groups controlled by Abrams. 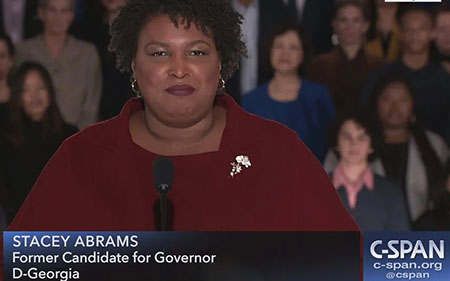 “In other words, a highly partisan Democrat political operative controlled the elections in Fulton County, which also involved a Nigerian national,” CDMedia reported.

CDMedia had reported in March that it was provided deposition transcripts of a Nigerian national who was selected by Dominion Voting Systems to be the Fulton County “County Technician” during the 2020 U.S. general election.

The residents testified that Abrams owns 16 percent of Now Account, and that Now Account financed and recruited employees for Happy Faces.

Though the county has been criticized for its reliance on temporary workers, Richard Barron, Fulton’s director of elections and registration, said Happy Faces saves the county money due to the fact that starting around 2015, its supplemental staff could no longer work as full-time employees because of the Affordable Cares Act’s definition of full-timers as anyone working at least 30 hours a week, the report noted.

“With overtime demands, compliance demands, we would have to double our workforce, if not triple it in big elections,” Barron said. “We needed flexibility and efficiency in the hiring process.”

“New revelations that Fulton County is unable to produce all ballot drop box transfer documents will be investigated thoroughly, as we have with other counties that failed to follow Georgia rules and regulations regarding drop boxes. This cannot continue,” Raffensperger tweeted on Monday.

Who counted the votes in Fulton County? Testimony at public hearing points to ‘highly partisan Democrat Stacey Abrams’ added by World Tribune on June 16, 2021
View all posts by World Tribune →