Facebook was down for users around the world on March 13.

“We’re aware that some people are currently having trouble accessing the Facebook family of apps. We’re working to resolve the issue as soon as possible,” Facebook tweeted. 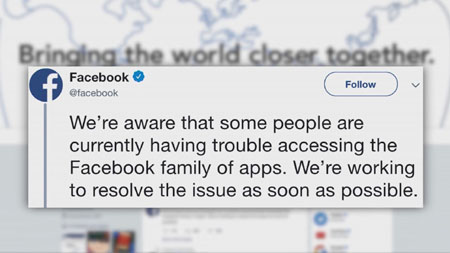 The Facebook outages began Wednesday afternoon ET and appeared to affect people in multiple regions, including the United States, Central and South America and Europe, according to tweets and the outage-tracking site DownDetector.com. Users in Asia were having problems on Thursday morning.

For many, the outage lasted for more than 14 hours. It was believed to be the biggest interruption ever suffered by the world’s largest social network. The hashtags #FacebookDown and #InstagramDown were trending on Twitter for much of the day.

Rumors spread of a massive DDoS denial attack on the social network, which Facebook denied.

Later, Facebook issued another tweet, saying: “We’re focused on working to resolve the issue as soon as possible, but can confirm that the issue is not related to a DDoS attack.”

“All was not well at Menlo Park. The antisocial network’s other properties, such as Messenger, WhatsApp, Oculus, and Instagram, were also suffering outages, according to netizens,” Kieren McCarthy wrote for The Register.

A ThousandEyes spokesperson said: “When investigating Facebook’s issues today, we’re not seeing any BGP changes that are affecting connectivity, packet loss or latency. Since Facebook uses its own backbone network, it’s not clear as to how an external transit route issue would cause a disruption within the internal Facebook network.

“If a route leak were affecting user access from the internet to the Facebook edge, then it would most likely manifest as paths changing, such as what happened when user access to Google [in November last year] was impacted by a route leak. Our global vantage points were able to capture the path changes in that case, but we’re not seeing any evidence so far of that happening today.”