Sen. Elizabeth Warren says the $93 trillion Green New Deal does not “go far enough” in addressing what she says is the biggest problem facing the world today, climate change. 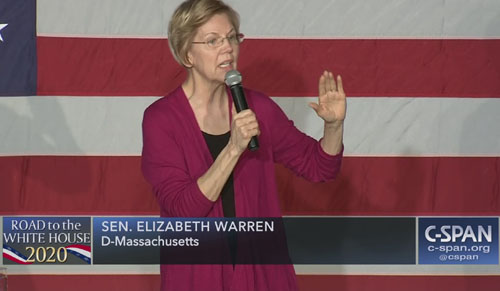 “What I want to see us do is get off an oil economy and not only for ourselves, but for the rest of the world,” the 2020 Democratic presidential candidate said at a CNN town hall on Thursday.

She added: “I want to see us move entirely to green. And let me say on this, I not only support a Green New Deal, I don’t think it goes far enough. I also have a Blue New Deal, because we’ve got to be thinking about our oceans as well that we need to protect.”

Warren said she backs a ban on fracking, the hydraulic fracturing method of drilling that involves spraying high pressure water and sand underground to make tiny fractures in rock to release gas, which can then be liquified.

Recent reports suggest the Green New Deal could cost tens of trillions of dollars. Americans could be forced to pay up to $93 trillion to implement the proposal over a decade, the American Action Forum (AAF) noted in a study earlier this month.

The Post noted that the admission came during an exchange between Chakrabarti and Sam Ricketts, climate director for Washington Gov. Jay Inslee, who ran a failed campaign for the 2020 Democratic presidential nomination.

The Post reported: “The interesting thing about the Green New Deal,” he said, “is it wasn’t originally a climate thing at all.” Ricketts greeted this startling notion with an attentive poker face. “Do you guys think of it as a climate thing?” Chakrabarti continued. “Because we really think of it as a how-do-you-change-the-entire-economy thing.”

“Climate change is real and deserves our attention. But not every policy to address it can be taken seriously. Take, for example, the Green New Deal – a sweeping proposal to “save our planet” that reads more like a parody of the progressive agenda. No laughing matter, however, is the proposal’s ultimate objective: to give government unprecedented power over people’s lives and our entire economy. …

“…Other aspects of the Green New Deal seem wildly out of place for an environmental resolution. Consider the promise of massive new entitlement programs that could only be achieved through a radical redistribution of wealth. Here, the proposal shows its true colors. This is not some run-of-the-mill progressive policy – it is a Trojan Horse for socialism.

“The Green New Deal aims to upend our entire economic system, wresting consumer choice from everyday Americans and putting personal decisions – from the food we eat to the cars we drive – in the hands of an unelected elite.”