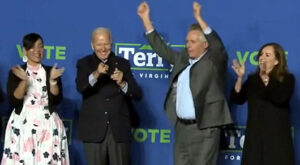 Terry McAuliffe’s loss in the Virginia gubernatorial race has sent shock waves through the Democrat establishment. Some are blaming the rise of racism, domestic terrorist parents of public-school students, and lack of understanding of true Marxism for the loss.

After careful study of the results, however, the campaign determined the true cause was a shockingly low turnout among 3 a.m. ballots. “Yeah, our ground game was clearly to blame,” said McAuliffe to tearful reporters.

“After studying the numbers, there is just no way to sugarcoat our failure to turn out the 3 a.m. ballots.  Bottom line is, we simply came up short. The votes in the key 3 a.m. demographic just weren’t there.”

The DNC is looking closely at what went wrong in Virginia to make sure they don’t repeat the mistakes in the crucial 2022 election.  So far, the clear takeaway is simply to make sure they have enough ballots in reserve to make up for a rise in racism, pornophobia, LGBTQaphobia, Islamophobia, and Marxismaphobia among the voters.

Virginia post-mortem: ‘Votes in the key 3 a.m. demographic just weren’t there’ added by Editor One on November 8, 2021
View all posts by Editor One →