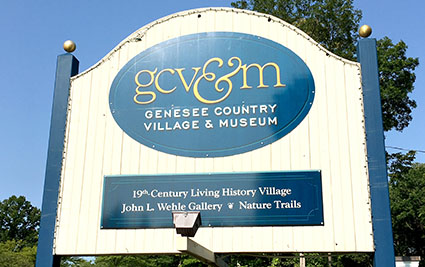 As it has done each July for decades, Genesee Country Village and Museum will plunge into Civil War history this weekend [July 17-18].

There will be cannon fire, and there will be muzzle flashes on the Great Meadow as part of artillery demonstrations (using blanks, of course).

But for the first time since the early 1980s, the living-history institution’s Civil War weekend will not host battle re-enactments in which hobbyists dressed as Union and Confederate soldiers clash on museum grounds, and the event won’t include Confederate iconography, such as the “Stars and Bars” flag.

Coronavirus concerns are haphazardly thrown out as one reason for not conducting a battle re-enactment at the 2021 “Civil War Living History Weekend.” But this soon gives way to an inane woke tap dance in which supposedly credentialed stewards of history justify leaving the Confederacy out of a historical event marking the War Between the States:

In the absence of the battle re-enactments, Civil War weekend will not have a physical Confederate presence. About 100 re-enactors will portray Union soldiers, [Museum CEO Becky] Wehle said. Guests, the museum’s website explains, will be able to visit their encampment and listen to the stories of combatants, including “colored troops and women who disguised themselves to join the war.”

But no re-enactors will play Confederate troops, and no Confederate symbols will be displayed.

When asked, Wehle said recent incidents involving the Confederate flag, including its use by white supremacists at a 2017 rally in Charlottesville, Virginia, where an anti-racist protester was killed, did not factor into the museum’s thinking. However, she said, current discussions around race did and spoke of the institution’s desire to be more broad and inclusive in its offerings.

Things get weirder from there.

“The Confederate flag represented the Confederate government and military, which explicitly supported slavery and slaveholders’ rights during the war,” Richard Newman, who is described as “a professor of history at Rochester Institute of Technology’s College of Liberal Arts, and an expert on the Civil War and abolitionism,” says in applauding the move. The Democrat & Chronicle relates that history prof Newman has decided “the banner cannot be viewed as a historical object independent of its ‘long and problematic’ use” as a symbol of “resistance to civil rights.”

“There is no way around that,” Newman told the paper in an email.

A minister who participated is civil rights marches in the 1960s weighs in as well.

“The use of that flag [in the 1960s] was a statement of resistance to racial integration. It had nothing to do with the Civil War, and it had everything to do with white supremacy,” Rev. Marvin McMickle says.

“A museum case is a great place for it, with appropriate language that puts it in its complete context — its 1860s Civil War context and its 1960s civil rights resistance context,” he added.

The rub here, of course, is that this civil war weekend is being hosted by a museum and is meant as an event to commemorate history. No matter. Confederate symbols will be tolerated only so long as they are mothballed. Yet the entire point of a “living history” museum event is to bring the dusty, old past out of those very same mothballs.

The total lack of logic would be infuriating if one did not realize these people are hardcore activists serving an agenda. There is no honest attempt to present genuine history.

And so, like so many other things co-opted by the dull minds of the Cultural Left, “Civil War Living History Weekend” will feature an array of heavy-handed boring propaganda straight out of a modern-day Disney Star Wars movie:

Some of the new offerings are focused on women. A talk will spotlight female soldiers and spies. And a female re-enactor will portray a woman struggling to maintain a family farm while her husband, sons and brothers are on the front lines. Others will explore the circumstances of Black and enslaved people, since, as the museum notes, New York played a key role in the abolitionist movement and the Underground Railroad….

Another presentation will focus on Black women who ran printing presses for war correspondents.

“All of these programs acknowledge that there were two sides to this war,” museum CEO Wehle lamely asserted to the Democrat & Chronicle in a weak defense of her leaden production.

But rest assured, the erasing of real history will continue under her watch:

As to whether the battle re-enactments, long a focal point, are a thing of the past, Wehle said: “Honestly, we don’t know. We’re taking this one step at a time to see how the reaction is to this event, and we’ll make a decision from there. I hope we can make it clear to people that this is a really tough topic to navigate through, and the museum is doing the best it can to provide authentic, educational and sensitive programming.”

Somewhere between authentic and sensitive, an entire Confederate Army of more than one million American men got disappeared.